I have briefly mentioned that I use Audacity quite a lot (Recording yourself to improve speaking ability), but the more I use the software, the more I realise how awesome it actually is. Audacity is your best friend when it comes to recording yourself, mimicking others, manipulating recordings, managing media and recording things you aren’t supposed to record. It’s also free of charge and can be  installed on most operating systems.

In this article, I will introduce several useful functions and show how they can be used to learn (or teach) Chinese. However, this isn’t meant to be a manual of how to use Audacity, so even though I will show you how to do certain things, please refer to the official website for help and support. I’m a language teacher and learner, I learn only what I need to learn about the technical details.

Audacity can be found, read about and downloaded here: Audacity (official page at SourceForge) 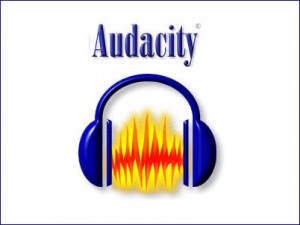 Before we get into any details, let’s look at what Audacity is. This is from the official about page:

This is what we will look at in this article:

This is a video I recorded of these six steps. It contains only sparse commentary, so read the rest of the article for more details. Obviously, you can do much more than this with Audacity, this is just a small demonstration.

Record from any source, record what you hear

Audacity can be set up to record anything you hear from your computer. This might be different depending on your operating system, but the general idea is to set Audacity’s input to “stereo mixer” or similar. WHen you press “record”, Audacity will register anything on your computer’s line out. Thus, if you find it hard to extract audio from a YouTube clip or from a movie you’re watching, use Audacity!

I use Linux and for me it’s a simple matter of changing the input settings in Audacity. If you use other operating systems, you can start here or simply search for “Audacity record playback” + [your operating system].

Apart from this, Audacity is your best friend when it comes to editing and manipulating recordings of various kinds. I sometimes record lectures or similar. I typically need two things to handle this kind of recording:

The first part is very complicated and I guess there are people who are actually earning their living from enhancing sound files, but we can do some basic but yet very effective things with Audacity. Noise removel is mostly a matter of trial and error, just use the function in the program and try different levels (the default ones to start with, obviously). Audacity’s compression function allows you to change the intensity of the recorded audio, removing high spikes and distributing the rest of the sound in a neat way.

Cutting and editing is fairly straightforward. Since you can actually see the audio, it’s a lot easier than trying to record from recordings or whatever else people do if they don’t know about Audacity or similar programs.

Automation is fairly complicated and I don’t know even a single percent of what there is to know, but I still want to point out that there is something called “chains” in Audacity that allows you to apply the same functions to any number of files. For instance, if you record twenty lectures in the same environment, you can use the same noise removal and compression settings for all files and you can apply these functions to all the twenty recordings with just one click. You can even make Audacity save the results as new files in the file format of your choice.

Mimicking native speakers is one of the most powerful ways of acquiring good pronunciation in any language. However, it’s not always practical to do so. If we listen to a YouTube clip, the interface simply doesn’t allow us to repeat exactly what we want to repeat and even if we have a sound file, it would take ages to use a normal media player to be able to mimic a few minutes of speech.

In audacity, this is fairly easy:

This is useful because it isn’t very easy to mimic native speakers at their normal rate of speech, not even for advanced learners. Just listening to the same sentence a dozen times before even trying is good start.

The next step would be to record your own voice over the voice of the native speaker. After having practised until you can read a sentence or passage, simply hit record and Audacity will play the audio while recording your voice. You can the mute the original audio and evaluate your own recording. More about this below.

If you’re interested in either mimicking or the 蔣勳 clip seen in the video, I suggest you read Jacob Gill’s article about how he used that very same clip to improve his pronunciation (we did this at the same time, although I didn’t finish the entire clip and didn’t publish anything about the results).

Slow down the rate of speech without changing the pitch

Some media players can slow down the speed of the audio, but while doing so, the pitch also drops. Thus, we all sound like drunkards at half speed and like smurfs on illegal substances on double the speed. Audacity has a function called “change tempo”, which allows you to change the speed without changing the pitch. This allows you to slow down the rate of speech to a level you’re more comfortable with. Obviously, if you slow things down too much, you will get weird results.

One very good way of improving your pronunciation is to record yourself. This fulfils several purposes at once:

These concepts have already been discussed in more detail in other articles, namely Recording yourself to improve speaking ability and Benchmarking progress to stay motivated. However, there is one more aspect of recording yourself I think is worth mentioning:

How do you use audacity?

Do you have any favourite functions? Do you use audacity to learn or teach Chinese in a way that I haven’t mentioned here? Leave a comment!