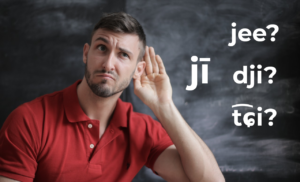 When we are born, our brains are open to the world of sound and we can perceive differences between sounds we as adults have learnt to ignore. To be able to master our native language as infants, our brains need to be able to sort sounds into categories through a process called categorical perception.

Hearing without filters is great before you know what language you need to learn, but for speech perception, categories are needed.

Speech sounds can usually be arranged along one or more spectra. For example, the difference between Pinyin b (IPA: [p]) and p (IPA: [[ph]) is aspiration, which is related to something called voice onset time, referring to how long it takes the voicing to start after the stop is released.

To get an idea of how voice onset time works, try saying bin and pin after each other with your fingers on your throat. You should be able to feel that the vibration starts earlier for bin than in pin. This is true in both English and Mandarin.

Learning to sort sounds into the correct categories

Depending on what language(s) you spoke as a child, your brain learnt to sort these sounds into the right categories based on voice onset time. As a native speaker of English, if you heard b repeated with gradually increasing voice onset time, at some point you would start hearing p instead.

The point is that line where you starting hearing p instead of b is different in different languages. Some languages even draw more than one line, meaning that there are three distinguishing sounds along this spectrum. this happens in Korean and Thai, for example.

An example of this is the English words “spin” and “pin”, in which the first “p” is unaspirated and the second is more aspirated (it has a longer voice onset time). Many native speakers of English perceive these two “p” sounds to be the same, but in other languages, they are different sounds.

We can learn to create and modify categories when we learn a second language as adults, too, but it requires much more effort and is rarely completely successful. The processes involved here are very complex and not fully understood.

How to really learn Mandarin pronunciation

So, what can we do to make this process easier? The most important thing is to listen to a variety of speakers and pay attention, and do so a lot. Someone first exaggerating a specific distinction (such as that between two tones) and then gradually making it more natural can also help.

Much research has been done into establishing new perceptual categories of speech sounds, some of which I summarised in the article How to learn to hear the sounds and tones in Mandarin:

The reason why most students have bad pronunciation

The main reason students typically don’t learn to pronounce Mandarin very well is that they rely on reading more than listening. They look at Pinyin and think that they know what the sounds are like, which means they don’t listen enough and don’t do so with an open mind (to the extent that this is possible).

To add insult to injury, many students just think they know Pinyin, but actually rely heavily on their native language to guess the pronunciation of certain sounds.

Priming your brain to hear the wrong sound

Written letters are treacherous. Most people of course know that the same letter can refer to different sounds in different languages. For example, speakers of English pronounce the capital of France with more aspiration (longer voice onset time) than speakers of French do (voice onset time close to zero), yet the city is spelt “Paris” in both languages. Similarly, if you pronounce Mandarin pīn (as in Pinyin) the same as the English word “pin”, you probably don’t aspirate it enough.

The problem here is that if you start your attempt to learn a new sound withe the letter used to write it down, your brain is already primed to hear the sound you’re used to hearing that letter representing.

So that’s the problem of reading pronunciation in a nutshell. It’s already hard to perceive some sounds, but if you prime your brain to hear something else, it makes it even harder!

Learn Mandarin pronunciation by listening, not by reading

Let’s look at an example from Mandarin. At university, I teach intermediate students that I haven’t had the privilege to teach as beginners. Some of them still pronounce Pinyin shì close to the English word “she”. If given to someone who does not speak a word of Mandarin, that is indeed how most people would guess that shi is read.

But it’s not, and they aren’t beginners anymore, yet many of them still say something close to English “she”. They haven’t realised that there’s something different with this -i. They assume it’s the same sound as in nǐ “you”.

Now, compare this with an approach based mostly on listening, which is what I prefer. When I teach complete beginners, I try to rely on the spoken language as much as possible and avoid even writing Pinyin in the beginning.

Why? Because they will hear what I write, not what I say. They see -i in ni, si and shi and assume they are the same, while they are in fact three completely different sounds. My highlighting that they are different sounds does not always help.

Naturally, focusing only on the spoken language is not very practical in the long run. It’s very hard to create a curriculum without any written content (remember, Pinyin is not allowed either), and it also requires very large amounts of teacher-student interaction, which is either expensive, impractical or both. Most adults also don’t like it when they can’t see things, can’t take notes or can’t look things up on their own.

Open your ears and open your mind

What’s the solution? How can you learn to pronounce Mandarin without being distracted by the written versions of sounds? Here are a few practical suggestions:

9 answers to questions about Pinyin and pronunciation

I’ve been interested in pronunciation for a long time and took almost a full year’s worth of graduate courses in Chinese phonetics when I studied in the master’s programme for teaching Chinese as a second language at 國立臺灣師範大學.

I’ve also taught and coached students in this area for years, collecting a large repertoire both common student problems and ways of solving them. Most of the research I’ve conducted myself has also been in this area, most in the area of tone perception.

Now I’ve taken all that knowledge and distilled it into a course aimed at Chinese students on all levels. This means that it gives all the information and materials a beginner needs, but that it also contains the guidance more advanced students need to fix problems with their pronunciation.

You can find out more about the course below. If you found this article interesting, you’re going to love the course! If it’s not currently open for registration, you can sign up for a waiting list to get notified when it becomes available next time!