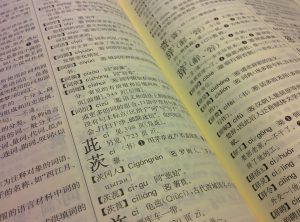 Looking up words is a fundamental part of learning a language. Even if you rely heavily on extensive reading and listening, you will still need to look up unfamiliar words and characters now and then.

Finding the meaning of an unfamiliar word is simple enough; just use the dictionary of your choice and see what it says. Yes, converting printed text to a digital format is a bit tricky the first time and you need to know which dictionary to use for optimal results (Pleco), but this really isn’t rocket science.

Looking up how to express something in Chinese, however, only appears easy, but is in fact very hard. Most students I’ve met can’t do this properly, so I decided to write this article both to explain the problem and help provide a solution to it.

Before I start, I want to mention that if you have a convenient way to get questions about language usage answered directly by a native speaker, this is much quicker than looking it up on your own. However, few people have that option all the time and there are other reasons why you might not want to do that. See my article about language question triage for more about this:

Looking up how to say/write something in Chinese

So, what do most students do when they, in the process of writing a text in Chinese, stumble on something they don’t know how to express? They enter the word they want to express in English into a dictionary, look for the corresponding Chinese and finish their sentence. The problem is that this method almost never works, except for very simple nouns (and sometimes not even then).

For comparison, when I translate things from English to Swedish, the above approach actually works well in perhaps 90% of the cases. The final sentence is often grammatically and idiomatically correct in Swedish.

When translating from English to Chinese, however, the resulting sentence is almost never correct; 90% of sentences produced this way are actually incorrect or at least very awkward.

Let’s look at an example. For this scenario, picture a student taking a writing course in Beijing*. In one assignment, the student is asked to introduce a company and its position on the market. Let’s say the student wants to convey the following:

The smartphone market is very competitive.

Now, the student first writes the general structure of the sentence along these lines:

Then he doesn’t know how to write “competitive”, looks it up in a dictionary and writes:

According to the teacher, this sentence doesn’t work. Let’s see what the student should have done to avoid this problem. Please note that this is just an example; it could have been anything, really.

* This example doesn’t work as well if you’re focusing on Taiwanese Mandarin; please refer to the note at the end for a discussion about this.

Don’t assume so much; look it up!

The problem is that student assumed too much. While he would probably not translate on a word-by-word basis if given a whole sentence, this approach is still easy to fall back on if one word is missing from a sentence like the one above.

He assumed that just because you can say that a situation is “very competitive” in English, you can express the same thing in Chinese, the only thing you need to look up how to say “competitive” and insert the first answer you find into the sentence.

Once you have found the word you’re looking for, go to the entry for that word in Chinese and start checking example sentences. Your goal is to answer two questions:

Check a few examples. If the likely answer to both questions is “yes”, go ahead and write your sentence. If the answer to the first question is “no”, then go back to your English-Chinese translation and find another keyword (you probably got the wrong word that just happens to mean several things in English). If the answer to the second question is “no”, keep reading example sentences until you see a common pattern you can use.

So, let’s continue with the example above and answer the two questions:

When you have a sentence you think is correct, you can often check if it’s in common use or not by using a search engine (I’ve written a whole article about using search engines for learning Chinese). This will not tell you if a wording is correct or not, but it can give you a very strong hint.

You can’t just paste your phrase and hit “go”, though, you need to remove or replace things that are unique to your sentence, but aren’t important. Remove unnecessary adjectives or other words that aren’t really part of the problem you’re trying to solve. You could also just input the words to see how they usually go together (if at all). Searching for 市场 + 竞争 + 激烈 gives a few examples:

There are more ways of expressing this, but the point is that we now have a way of expressing this which is very likely to work. So if we use the first example from above (which seemed to be the most common one), we get:

A note about Taiwanese Mandarin

There are two problems with this example for students who learn Taiwanese Mandarin, although the principles still hold true. I chose this example because it’s pretty good for all other purposes, but also because it allows me to mention some of the dangers with using search engines blindly.

The first problem is quite simple: “smart phone” is often 智慧型手機. That’s just a different preference in vocabulary and not that hard to deal with. The second problem is that the usage 智慧型手機市場很競爭 is actually okay, even if the other versions posted above also work.

This is relatively easy to spot when you search, because if you search for 市場很競爭, you’ll see that almost all examples are using traditional characters. Most Mainland dictionaries and teachers will not approve of that usage, though.

The process of looking up how something is said or written in Chinese ought to be straightforward, but it actually isn’t. This is to a large extent because many students assume too much, resorting to a word-by-word translation without looking for context. This almost never works, leading to strange and awkward sentences.

If you want your texts in Chinese to read like Chinese instead of something a translation tool spat out, you have to spend some extra time verifying both that you have the right word and that it is used the way you think it is!