Have you ever had the feeling that, after speaking with someone for a long time and understood most of what they say, you then speak with someone else and you understand nothing? Your confidence drops, you start thinking that your listening ability is really poor. You thought you knew some Chinese, but apparently you don’t.

I’ve had this feeling many times and it’s perfectly natural. It arises because all speakers of any language speak in slightly different ways. Think of people you know who share your native language, do they all speak the same way? Do they use the same words and the same manner of speech? The obvious answer is no.

Here are some factors that differ between different speakers: 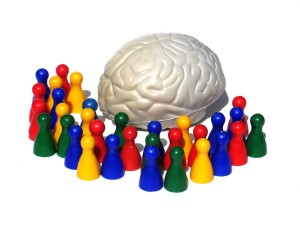 All of these are layers added on top of what is said. If you have only heard a word spoken by one single person, you’ve heard that word including all of the above factors (and possible some more I haven’t thought of). However, the word itself doesn’t change meaning just because the way in which it is said changes. Thus, if we only listen to one person speaking, we will associate the way in which it’s said with the meaning of the word, simply because for us, there is no difference.

It’s not the same sound, but it’s still the same word

If we then hear a second person saying the same word in a different way, we might be confused. This is not the word we have learnt! Or at least our brains don’t recognise it as such, because it’s not the same sound as we have heard many times before. After a while, though, we become used to this new way of saying the word and we can understand what’s being said to us.

When we hear a third person speak, this starts over again, but the process is much quicker this time. This higher speed is crucial, because the more times you expose yourself to different versions of the same word, the better you become at seeing through the superficial differences in pronunciation or style, and get through directly to the meaning. Naturally, this effect is carried over to similar words.

The same is true for vocabulary and grammar

Native speakers use different words when they speak, not necessarily because they come from different regions, but simply out of habit. Let’s look at how to say “for example”:

In spoken Chinese, these are more or less interchangeable and which one is used is just a matter of habit. I remember my first teacher in Taiwan, who used 譬如, which I had never heard before. I thought it was a Taiwanese thing. Then the next teacher I had always used 比如. The point is that the first teacher could equally well have used 比如 and the second 譬如, but they didn’t. Now we start to see why listening to many different people is essential.

Every listening comprehension test I’ve ever taken in Chinese involve only people who speak perfectly standard Mandarin. The problem is that very few people actually speak like this (very educated people might, but it’s still rare). Thus, even if you can understand what your girlfriend is saying and can maintain a conversation with the restaurant owner around the corner, it doesn’t necessarily mean you will score well on a formal test. This is not because your Chinese sucks, it’s because you’re not used to hearing that kind of Chinese. It might not even be a difference in vocabulary, it might just be that they speak in a different way.

From this follows that we should try to listen to many different kinds of people speaking Chinese. If we stick only to our teacher and textbook, we will have problems understanding ordinary people. If we’ve picked up everything we know in the Hutongs of Beijing, we will have problems understanding people from Guangdong. Also check this article about learning to understand different Chinese dialects.

Here are a few things you can do to diversify your listening practice:

This article is part of my series about improving listening ability. Here are the rest of the articles in this series:

In short, your listening ability might be better than you think. What you need is to diversify your learning and get used to hearing different people speaking. People with different age, sex, profession, education, home town, attitude and personality. Only then can you acquire complete listening ability, which isn’t just limited to the kind of Chinese you’re used to hearing.