When I wrote a guest article about language hacking on the Mezzofanti Guild a while back, I took some time to think what I consider to be the essential elements of language hacking, what makes it different from just language studying. I ended up with a list of things, some of which I talked about in that article. Other things I haven’t talked about so much, something I intend to change with a few articles, this being the first one. 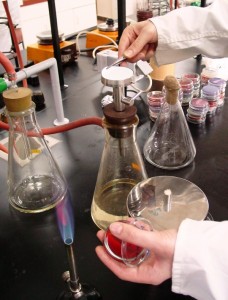 The first thing I want to look at is the notion of actually doing things as opposed to just reading about them and, depending on what you read, either shake your head in disagreement or nod your head in approval. As you might guess, I spend a significant time reading about learning Chinese, both in books and journal articles, but also on blogs and forums. I consider this influx of ideas to be essential, I could not possible write everything I’ve written on this website without the inspiration and help I’ve received from others.

Reading about something isn’t enough

Even though it’s important to open doors, simply learning of a method isn’t enough. Sure, it will give you a certain amount of knowledge, but it will be the knowledge of the armchair general, who knows everything about warfare but has never held a sword in his hands. This is good if you want to write books about war, but it’s not good if you want to actually fight a war. The same is true for language learning. In order to master language learning as a skill, you need to try many different things, because it’s unlikely that the first method you stumble upon is the best one for you.

Please take a moment and consider the following question:

How many of the good ideas you’ve read about recently have you neglected to try?

I can list quite a few and I’m sure that most of you can as well.

Why is this? I think it’s mostly a question about complacency and rigidity (see this article about the convenience trap and how to escape it). We have our ways of studying and we tend to stick to what we know, not necessarily because we think it’s superior to other methods, but simply because it’s more convenient. We might even know that there are better methods, but we still stick to what we know simply because challenging our habits requires effort.

Some ideas operate on a scale which makes them hard to test and in these cases, simply reading might be the only way of evaluation we have. For instance, I like the idea of sentence mining and using entire sentences for spaced repetition, but it’s simply not possible for me personally to evaluate this method. I have already learnt Chinese to a certain level and I can’t large-scale methods again for the same language. Sure, I could use a new method when learning a different language, but the results are not necessarily applicable to Chinese.

Still, there listening to what other successful learners have to say is valuable in these cases. Also remember that there are polyglots who focus on learning many languages and even though it might not be the case that you can apply everything to one specific language, it still makes sense to read and learn.

It’s sometimes possible to reduce the scale somewhat. For instance, if you want to try sentence mining, you can do so for a specific area. You don’t need to delete all your other flashcards and start again just because you want to try a new method. Try it out next time you read a book or start mining sentences from a specific TV program. Only then will you know what it’s like.

Most other methods are much easier to test and there is simply no other explanation for not trying than complacency and laziness. If you really think an idea about improving speaking ability (such as playing a tone guessing game to improve tones or other word games to practise fluency), write it down somewhere and try that next time you have an opportunity. If it works well, incorporate it into your study routine, if not, then revise the idea or abandon it entirely.

This doesn’t mean that you should try everything you read about. Khatz over at AJATT has said quite a few interesting things about language learning, but the following quote has always struck me as particularly insightful and is also relevant for what we’re talking about in this article:

Most ideas are worth reading about, at least if they are new or unique in some way or has worked for other people. That, however, doesn’t mean that we should try everything we read about, that would be way too time consuming and would be utterly confusing. No, instead, we should try to determine if the advice someone gives us is good advice and then heed that. If we hear something we have no reason to believe works, we should ignore it and move on.

Having a clear idea about what our goals are is essential when doing this, because no method can be evaluated as effective or not if we don’t know what it’s supposed to achieve.

All things said and done, I think the people who try too many different methods are in a minuscule minority. In other words, the problem isn’t that we’re too smart or even too humble, the problem is that we are lazy and complacent (myself included, of course). Most of us need to widen our horizons and not only read about awesome ways of learning Chinese, but also implement them as well.

Promise yourself this: Next time you encounter a tip, trick, hack or strategy related to learning Chinese which sounds promising, try it. If you encounter many interesting methods, keep a list of them and try them out when you feel adventurous.