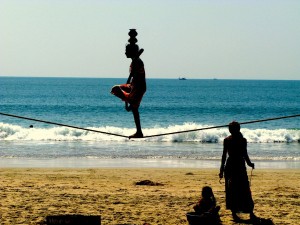 I have had the opportunity to pursue many of my dreams and ambitions in life (learning Chinese is one of them) together with other people, sometimes with long-time friends, sometimes with new acquaintances. With time, I’ve gradually become aware that there seem to be two things that separate myself from many of the people I’ve met. I think that I have a very healthy attitude towards failure, progress and competition that helps me achieve what I want, usually with support from people around me.

I didn’t know Chinese when I was born, neither did I learn it by magic

It’s absolutely astonishing that people really seem to believe that skill X is something innate, that the performer could do it when he or she was born, or at least that the skill X was somehow magically acquired at some point in the past. I can’t count the number of times I’ve heard people say “How can you do that? How is that possible?” This can be said about anything, but apart from being able to speak Chinese, I usually hear it about unicycling, diving or Rubik’s cube.

The question “How can you do that?” might look innocent, but I think it hides a ton of prejudice and negative thoughts that is stopping you from achieving whatever it is you want to achieve. To be blunt, the question is inane and the answer is obvious:

It’s as if the person asking this question thinks that I could speak Chinese fluently since the age of five or that I could perform some difficult dive when I was ten. This is wrong. I started learning both Chinese and diving when I was around 23.

Yeah, yeah, but perhaps people are just asking this because they don’t know what to say? It’s more of a rhetorical question than a real question, you might say. I think that’s wrong. Saying “How can you do that?” implies that the connection between practice and end-result isn’t obvious, because then you would say something else. If I see someone who can do something I can’t and do it extremely well, my first reaction is curiosity. I might want to know how he or she practised or what kind of skills it involves.

I think the notion of talent is yet another barrier behind which people protect themselves form success. If it requires a ton of talent to be able to learn Chinese fluently, it means that you have an excuse if you don’t learn the language. You can just say that so and so is more talented, and that’s it. You’re not talented enough. This argument fails to take into account the fact that language learning (and many other tasks) requires a vast amount of time to accomplish. Talent might be a factor, but hard work is what really counts. Saying that something requires talent and that therefore you can’t do it is just a bad excuse. You can continue saying that if you wish, but you would benefit a lot more if you recognised the fact that most endeavours in life are about 95% hard work and 5% talent.

Are you surprised when you go to the hospital and the doctor is accurately able to say what’s wrong with you? Do you marvel at the fact that a bridge doesn’t fall down when you drive over it? Do you feel awe when someone repairs the plumbing in your home?

Probably not. You know that the education needed to make these things work take years to finish. No-one is born a doctor, an engineer or a plumber. If you really wanted to and had the time and the opportunity, I think most people could learn those professions as well. The same is true for learning Chinese. The point is that no-one knows anything when they’re born. We learn things and we keep on learning things after we’ve grown up.

I can’t remember who said this, but someone thought that the Olympic Games shouldn’t be broadcast on TV because we never get to see the tens of thousands of hours of training that lie behind each gold medal. We watch these superstars on TV and marvel at their skill, without appreciating or even beginning to understand what it took to achieve such a pinnacle of proficiency.

Although a bit contrived, I think there is some truth in this. By watching only the perfected end-result, we create an insurmountable wall between ourselves and them. They become untouchable. They are amazing. They can do the impossible. In fact, there is no wall, just a gradual steeper slope. Everyone can’t be a sprint champion, but most people can learn to run really, really fast if that’s what they want to do.

This leads me to the second part of this article, namely how to regard people who are better than you are, how to look up that slope without being daunted by the distance you have to climb to get to a certain level. In other words, how to survive learning Chinese in an environment which is actually way above your level. This is in fact something I recommend, but that will be the focus of a separate article (Is taking a Chinese course that’s too hard good for your learning?).

Some people look up the slope with envy, some with awe. I would argue that both of these are destructive attitudes. Curiosity and an open mind is what you need.

Learn from your superiors, teach the rest

I’m not a big fan of Confucius in general, but one sentence in the Analects is quite powerful: 三人行必有我師焉. It means that in a group of three people, there is bound to be someone who can be your teacher. In other words, Confucius says that everyone has their own set of skills and experiences that should be valued and that others should strive to learn. No-one is the grandmaster of all situations, of all trades and all walks of life. I can teach you how to learn Chinese, what can you teach me? Or, if we keep ourselves to Chinese for a moment, perhaps my pronunciation is better than yours, but you probably know other areas better than I do.

Be brave, open your mind and learn more

This illustrates a major point in how I regard other people. If I meet someone who can do something I can’t, but that I want to be able to do, I try to keep this person as close as possible, realising that this is a potential teacher. When I lived in Taiwan, I usually studied with people whose Chinese was a lot better than my own. Some people wouldn’t dare to do that because they would feel bad, inferior and so on. Every time they talked to other, superior classmates, it would highlight shortcomings and failures.

Sure it would. You would never be the best in your class, but if you turn it around and look at it from the other direction, you suddenly have not one teacher in your class, but a whole group! Keeping these people as closely as possible, you learn how they learn, you study how they study. And you improve, probably much faster than they do, because they only have one teacher. Perhaps you might not feel that you’re improving that much, because you will still be far behind, but measured against some more objective benchmarks you will know that the distance is rapidly decreasing.

Regard superiors as teachers, not rivals or opponents

I really think that Confucius hit the nail on its head with the above quote. As soon as you see someone who is superior to you, you shouldn’t see a competitor, an enemy or a rival, you should see a teacher. Perhaps he or she won’t be your formal teacher, but in your mind, think of your superiors as your teachers and everything will be a lot easier. Use them as sources of inspiration and knowledge.

Of course, it works the other way around, too. If in a group of three someone can be your teacher, it also means that in the same group, you can be the teacher of others. Teaching is an exceptionally powerful way of learning, but I feel that it’s slightly outside the scope of this article to delve deeper into that question. Just realise that in any situation, you can learn and you can teach. You can be inspired, but don’t forget that you can inspire others, too.

To inspire and to be inspired

I’ve said what I wanted to say already, but I’m going to sum things up before ending this article. Teaching and inspiring are two closely related things. If you can see all superiors as sources of inspiration and knowledge, you will advance faster than if you view them as rivals or opponents. Similarly, realise that you have your own strong sides that inspire other people. Don’t hesitate to teach others if they want to be taught. Inspiration is cyclic in its nature and should flow freely in all directions.