The time barrel was first mentioned in an article I wrote about background listening a while back. I needed a metaphor to explain how it was possible to listen to Chinese a lot without actually spending that much extra time.

Most people have jobs, some study other things and only a few of us study Chinese full-time. Now, it’s only natural that someone who studies full time can learn more, but it’s very likely that you have more room for Chinese than you think.

The basic formula is very simple:

Important: Time management is about doing what you want to do with your time,  it’s not only about getting rid of things that aren’t “useful” and which don’t take you towards your goal of learning Chinese. Managing your time is useful whatever your goal is. If you lead a busy life and want to learn Chinese too, that’s fine. If you have all the free time in the world, but want to play computer games as much as possible, time management is still useful. In other words, in the following discussion, I don’t really care about what the tasks are, as long as they are tasks you want to complete, for whatever reason. 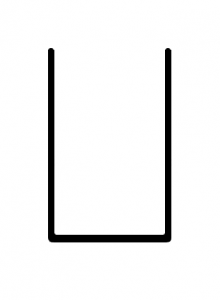 To show how I think about time management and studying, allow me to introduce the time barrel. It doesn’t look like much right now, it’s just a container. However, before we talk about what we can fill the container with, we need to talk about the container itself.

The barrel represents all 24 hours in one day

Regardless of how much you try, you can never change the length of one day and neither can you change the size of the barrel. We can change what we put in it though. 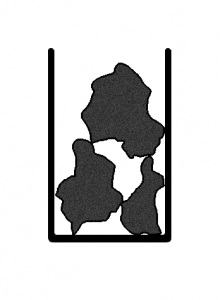 The rocks represent major tasks that can’t be interfered with

Most of us have things in life which we either must do to survive or that we consider so important that we have to do them. The first and most important one is sleeping, because no matter what we do, we need to sleep.

If you’re close to the average of 8 hours sleep per day, your barrel will be contain one big rock representing those eight hours.

If you have weird sleeping patterns, like sleeping less during the night and making up the deficit with power naps, you’ll have smaller rocks that are more flexible.

Apart from sleeping, there might be other things we have to do, like working, eating and maintaining contact with friends and family. Rather than regarding these as big lumps of rock, I think most of them can be considered to be pebbles (see below), so instead of regarding eating as a block two hours long, we can regard it as many smaller pebbles.

Depending on what kind of job you have, the same will be true there. A teacher has lessons and meetings he has to attend to, but that hardly fills up eight hours per day. The total work time might still exceed eight hours, but it’s not one big lump for teachers.

Going to class is of course also represented by rocks, regardless of what you’re studying (Chinese or something else). I have simplified the situation a bit and just drawn a few rocks, but as we can see, the barrel is already getting full! 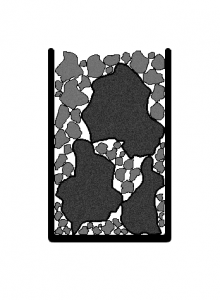 We still have room for pebbles

Now, this is where most people stop and say “I sleep for eight hours, I work for eight hours, it takes two hours to cook and eat, I have to maintain contact with friends and exercise, so there is no time left for language learning!” This is obviously not the case, there is still room for pebbles.

If rocks represented big, bulky tasks, pebbles represent smaller tasks we can move about more freely. Of course, there’s no fixed definition of what  a pebble is and what a rock is, but let’s say a rock is something which takes several hours to complete whereas a pebble only takes ten minutes. Now, even though our day looked full, we can see that it’s still possible to fill it with a whole lot of pebbles. Here are some tasks that can be considered to be pebbles: 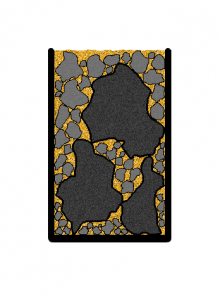 …and yet there is still room for sand that trickles down between the pebbles and fills the spaces you didn’t know where there. This is the kind of studying you only do for a few seconds up to several minutes each time, but that accumulates over time to become a significant factor. There aren’t many tasks that are suitably represented by sand, but there are a few that are possible because of modern technology: 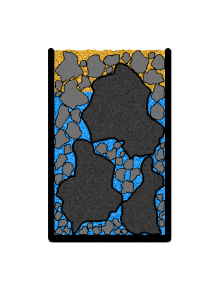 The barrel is full!

Or is it? If you have a barrel full of rocks, pebbles and sand, it certainly looks very full. Not a single grain of sand can be added, let alone pebbles or rocks. Still, it’s possible to add several litres of water to such a barrel without it overflowing. Water fills the spaced we didn’t know existed, it superimposes itself over the other things in the barrel. This means that there are very few things indeed that can be represented by that water, but here are a few examples:

No metaphor is perfect

This is just one way of looking at time management and because it is a metaphor, it is also flawed. It will highlight some things I find important (the fact that we have more time than we think and that we need to find ways to study that fit in our time barrels), but it will also miss some things. For instance, this metaphor isn’t good to explain the fact that you can do many things at the same time. Listening to Chinese while doing the laundry would have to be water superimposed on rock, which isn’t neat at all. Still, I hope I have been able to show that you don’t need one three-hour block of free time per day to study three hours.

Be dynamic and flexible in your endeavour to learn Chinese, be on the lookout for ways to fit Chinese into your day that doesn’t interfere too much with the other important things you do in your life!