No, this is not related to anything written by Jorge Luis Borges, but it is related to both dictionaries and labyrinths anyhow. Although there are hard-line extremists who advocate using only the target language when studying languages, I think most people agree that using knowledge from one’s native language is good or indeed necessary. When I started studying Chinese, if I encountered a word I didn’t know what it meant, I looked it up in a Chinese-English dictionary. Anything else would have meant hours of work and, in the long run, madness.

The problem with Chinese-English dictionaries 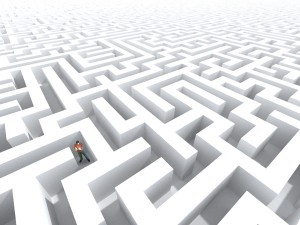 Of course, this comes with it’s own problems, since the words in Chinese and English overlap only to a certain degree (much, much less than between Swedish, English or French for instance), but it’s often good enough, at least for understanding. Chinese-English dictionaries are also problematic, because they are seldom accurate enough to be reliable. Using a dictionary in a language you know is like using a bad map, which will allow you to find your way around, but will occasionally lead you astray. This is acceptable as long as merely arriving at the destination is our goal.

Sooner or later, however, every student needs to start using a native dictionary. I almost never use English-Swedish dictionaries (I do sometimes for plants and animals) and I don’t need to, because I understand 99,9% of all definitions in a normal English-English dictionary. That’s not true in Chinese, but after becoming proficient enough in Chinese to read authentic texts, I started to shift from Chinese-English to Chinese-Chinese dictionaries. I think that this situation can be much likened to entering a labyrinths, trying to explore and map unknown territories.

This a post about this adventure and also a guide to how to survive in these convoluted corridors.

The first time I used a Chinese dictionary, I gave up immediately. Even explanations of simple words I knew well contained many words and characters I had never even seen before. In other words, I stepped into the labyrinth and saw the path ahead of me fork off in more directions than I could count. Picking one at random, I found that the next intersection was equally unfamiliar.

However long I walked in this labyrinth, I would never reach the middle and I would never return to the position where I started. The few points in the maze I knew (words I had studied) were close to useless, because they were too sparse and not connected. This is why I think it’s a waste of time to try to learn Chinese in Chinese for a beginner; you need at least a rough map to refer to in order to survive.

However, I’ve kept eyeing the labyrinth sideways, when it isn’t looking and won’t bite, and I’ve found some things out that make it more interesting. I have tried to enter it many times, using different approaches. After a while, I become well enough equipped to enter it properly and survive in it’s winding corridors.

To start with, it’s not true that all dictionaries are the same, and thus there are many different labyrinths with many different properties. Using a highly specialised dictionary is considerably more difficult than using a more accessible one. Let’s consider these examples if you’re studying English. Let’s look at the word “labyrinth” as defined in two dictionaries, first Merriam-Webster:

1a : a place constructed of or full of intricate passageways and blind alleys
1b : a maze (as in a garden) formed by paths separated by high hedges
2: something extremely complex or tortuous in structure, arrangement, or character : intricacy, perplexity
3: a tortuous anatomical structure; especially : the internal ear or its bony or membranous part

And then the same word in Longman Dictionary of Contemporary English:

1:a large network of paths or passages which cross each other, making it very difficult to find your way [= maze]
2:something that is very complicated and difficult to understand

I don’t mean to say that either of these entries are extremely hard, but there is a considerable difference in required reading ability between these two dictionaries. To start with, the Merriam-Webster entry contains 38 different words and the Longman only 26. To understand the first entry, you need to already master words such as “intricate”, “blind alley”, “maze”, “tortuous”, “intricacy”, “perplexity” and “membranous”, whereas the second entry require a lot less. An interesting point here is that many of the words I just listed are considerably more difficult than the word we are currently looking up.

Thus, before you even think about entering the labyrinth, try to find out something about it, preferably by asking an advanced learner or a native speaker who can easily judge which dictionary is the most suitable for you (links to online dictionaries are included at the end). I would never ever recommend Merriam-Webster to a beginner (or even fairly advanced students), because the Longman dictionary is good enough for almost all situations. However, sometimes Merriam-Webster is a lot more complete and accurate, making it the preferred choice. It all depends on what knowledge and tools you carry with you into the labyrinth.

This is what we’re going to talk about now.

Surviving gear you will need in the labyrinth

Before entering the labyrinth and starting using Chinese-Chinese dictionaries in my studying, I had acquired some knowledge and tools:

Yes, it’s possible to cheat and there are short-cuts. You can study some basic labyrinth architecture, bring your shoddy, native-language map, you can skip some corridors that end up in places you’ve already been and you can try to avoid the less trodden parts of the labyrinth.

Entering the labyrinth with the goal to map everything (i.e. not heeding any of the above advice ) is probably stupid and definitely impossible. A language is simply too big to ever grasp fully (you don’t mean to say that you know everything about your native language, do you?). How you choose to limit exploration is up to you, though.

Still, you can go on a rampage now and then if you like. This might be even more fun if you do it with a friend:

During these adventures, it’s up to you how detailed a map you want to draw. Sometimes, I’m currently recording almost every unknown passage and intersection, storing and reviewing everything with Anki, but sometimes I only jot down the most important words and skip all near-synonyms or words I can guess. If you encounter words more than once on separate journeys, it’s usually a good idea to look them up. This is one indication of frequency. Most dictionaries won’t tell you how commonly used a word is (links to online dictionaries are included at the end).

So, what do you choose, using a badly drawn and inaccurate map, or entering a strange and perhaps dangerous labyrinth, trying to understand how it works? I think that the answer depends much on how much you have studied (i.e. how strange the labyrinth is) and what your goal is. If you’re short of time, running around in labyrinths all day isn’t a good idea, although you might have to do that sooner or later anyway. If you’re happy as long as you learn Chinese, strolling in the labyrinth is excellent.

I personally prefer to have a rough map that contains errors, but lets me find my way to whatever place I’m going, rather than using native dictionaries and not understanding very well what the definitions mean. Neither of these situations is ideal, but for my three couple of years studying Chinese, the rough map was a formidable guide. Still, however much one tries, this kind of map can never be accurate enough, one has to switch to native maps sooner or later.

There are many dictionaries to choose from and some of them use the same definitions. I’ve included these in the order I find them useful. There are a multitude of hardware dictionaries, too (such as those for electronic devices, which I’ve found to contain easier definitions) or printed editions (which I haven’t included). If you know of more, useful dictionaries, please leave a comment! I would especially interested in easier dictionaries.