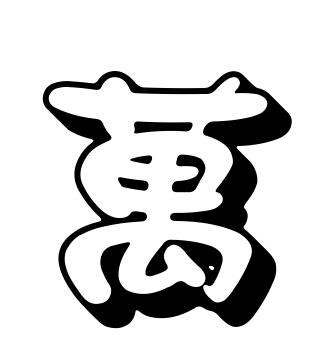 The traditional (or fraud-proof) character for 10,000.

Is mastering a subject mainly about innate gifts or about hard work? If it is about hard work, how long does it take? The first of these questions has of course been attracting people’s attention for a long time, but it’s not the people who ask this question who are in trouble, but those who don’t even think it is question in the first place.

Too many seem to assume that learning anything (especially languages) is about being talented and having a gift for learning (again, very common for language learning). Although it’s arguably true that some people seem to learn languages more easily than others, this is far from the whole truth.

In this article, I’m going to argue that learning Chinese is mainly about blood, sweat and tears, not talent. Of course, if you’re wise, you’ll find ways to bleed, sweat and cry that you actually enjoy or at least think is worthwhile, but hard work is still what will propel you forward, not some inner ability you were (or weren’t) born with. Similarly, saying that you can’t learn because you don’t have the gift is equally invalid. If other people can work hard to master Chinese, so can you.

I think what people usually call “talent” starts from early childhood, meaning that it’s something grown or learnt rather than something being genuinely innate  In school, pupils are very quickly sorted into categories: those who are smart and those who aren’t. If you’re the smart type, you’ll get lots of encouragement from your environment, but if you’re unfortunate enough to be placed in the other category, then you’ll have a more difficult time.

The problem is that people base their ability to learn something on what they did in school, perhaps ten or twenty years ago. I’ve read about and heard innumerable people state that they can’t learn a language and then follow it up with “I took French evening classes and it was really hard” or “I studied German for six years in school and I still can’t speak the language”.

This is nonsense. These people aren’t assessing their own ability to learn, they’re simply saying that under that kind of circumstances, they weren’t able to learn the languages to a satisfactory level. Then they go on and read about the polyglots who travel the world to learn many languages, usually very quickly. Even though I have argued that learning Chinese in just a few months is, depending on definitions, impossible, that’s not saying you can’t learn an awful lot. Let’s take French as an example, simply because I have studied French for more than six years in school and still can’t speak very well (in other words, I was once one of the people I criticise above).

Practice is counted in hours, not in years

If someone claims to have learnt French in just a few months, most people would either say that it’s a lie or that the person is extremely talented. Neither is necessarily true (although both might be, of course). The mistake people make is that they count practice in years and not in hours. Let me illustrate with a short dialogue:

A: Have you studied any foreign language?
B: Yes, I’ve studied French.
A: For how long?
B: Six years.
A: Wow! You must be very good then.
B: No, I can hardly communicate with natives.

This dialogue is weird only if you think that six years means six years of serious studying, because then you really should be very good at French. But if B in this dialogue only took one hour of evening classes every second week for six years and did no homework, I don’t think he’d be able to communicate very well, even after six years.

Let’s look at the numbers of a more realistic example. Let’s say that I study French in school for six years. That means roughly 40 weeks/year because of holidays and so on. Most people don’t have class everyday, let’s say we have three hours of French each week and do two hours of homework, then this adds up to 200 hours in one year or 1200 in six years.

Compare this with the serious language learner, immersed in the language and doing nothing but studying. Realistically, it’s very hard to maintain a lifestyle where you do nothing but learning languages, but for a short period of time, I know it’s possible to study non-stop, but let’s say 14 hours/day, which gives plenty of time to sleep, eat and so on. If you do that for three months, you’ll end up with 1260 hours.

As we can see, the avid language learner totals more hours in three months than an average high-school student does in six years.

What can we learn from this? Mainly, we learn that what seems to be impossible feats of talent is in reality the result of hard work (counted in hours), although concentrated in a short duration of time (counted in years). We also learn that by erroneously comparing someone else’s learning process to our own experience, we draw incorrect conclusions about how others achieve success. We tend to dismiss expertise simply as the result of innate ability, which is wrong. Some subjects are more prone to this than others. For instance, would you attribute a surgeons skill to innate ability? What about a musician? Do you realise how many hours an Olympic gymnast has practised when you watch him or her on TV?

Let’s see what Malcolm Gladwell (the guy who is usually attributed with popularising the 10,000 hour rule) has to say about this:

Basically, the 10,000 hour rule states that if you want to get good at something, you need to spend approximately 10,000 hours practising. Gladwell claims that this figure is relevant for many fields, but I don’t really care about the exact number. The point is that it’s there and that it’s there without referring to talent. Anyone can spend 10,000 hours if they really want to.

Note that “practice” in this case means deliberate practice, i.e. striving actively to become better by challenging yourself. Most people who practice simply do so in a passive manner, which doesn’t really count (or if it counts, it counts less than true deliberate practice). Anders Ericsson, a pioneer researcher in the field of deliberate practice,makes a clear difference between deliberate practice (top musicians) and ordinary experience (everyday activities). Since this is a major topic of its own, I’ll save this discussion for an upcoming article.

What I want to say in this post is very simple: Learning Chinese takes a long time (measured in hours, not in years) and hard work. If you’re smart, you’ll make sure the road is enjoyable, but you’ll still have to walk it. Each persons road might be different, but it’s simply not the case that someone else’s road is half as long as yours, provided you have roughly the same background.

So, don’t use talent either as an excuse not to learn, either because you think you’re talented and therefore don’t need to study, or, perhaps more commonly, because you think you aren’t talented and therefore can’t learn. Everyone can invest 10,000 hours if they really want to and if they think it’s worthwhile. As I’ve stated earlier, the number itself isn’t the point, what’s important is that it’s there and that you have no real excuse of not getting there, provided you are really interested.

Reaching your goal might take more or less than 10,000 hours, but whatever the true number is, it’s still an indication that you can and need to study, regardless of talent.