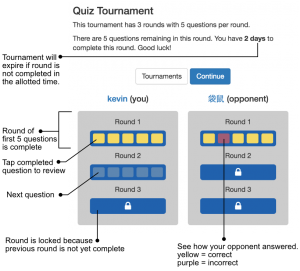 Playing games, especially with other people in a situation of friendly competition, is a great way of boosting motivation.

I’ve wanted to find a way to provide this for Chinese learners for a while and now Kevin and I have created a first version of a Chinese quiz tournament over at WordSwing.

It’s free, but you need an account to participate. If you want to try it directly, click here. If you want to know more about the quiz tournaments, then the rest of this post will introduce them in more detail!

Each question is a race against the clock. You and your opponent will each be asked the same set of questions and you are tasked with trying to answer each question before the clock runs out. After you respond to each question you can study the content at your leisure before moving on to the next question. 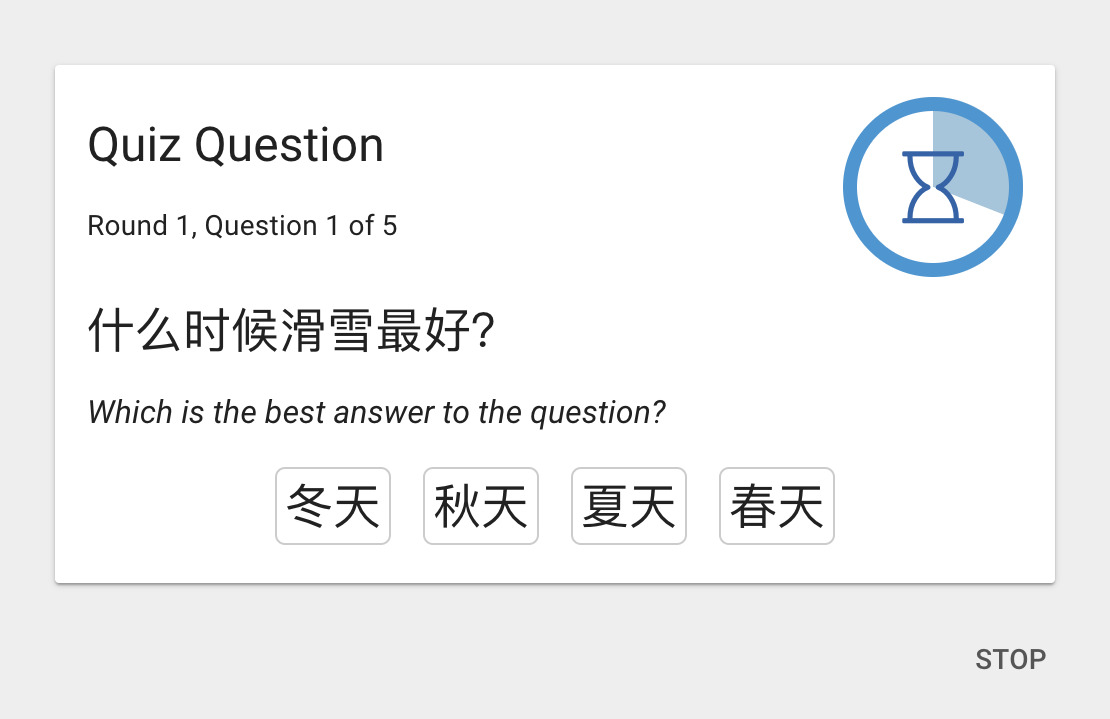 For each question, your task is to read the Chinese sentence and select the best answer among the four or five choices given. Only one answer is correct. The timer at the right shows how much time you have left to answer.

Who is this for?

There’s currently only one level of difficulty, so if you’re a complete beginner, this will be too hard, and if you’re an advanced learner, it will be too easy. It should be good for intermediate learners, though! Here are a few more sample questions to help you gauge the difficulty:

At present, there are only a couple hundred questions, and so as you play, you’ll start to see some questions a second or third time. So even if these questions are quite challenging given your current Chinese level, with some playing, you’ll soon be able to get many answers correct.

Why is it a good idea?

There are several reason this is a good idea for learning, some of which have been mentioned briefly above. Here’s an overview of the reasons why we wanted to created this activity:

The most important reason might be a combination of all of these that turns what could have been boring reading comprehension questions into a fun game.

How does it work?

Each tournament consists of a few rounds of questions. Here is what a partially completed tournament looks like: 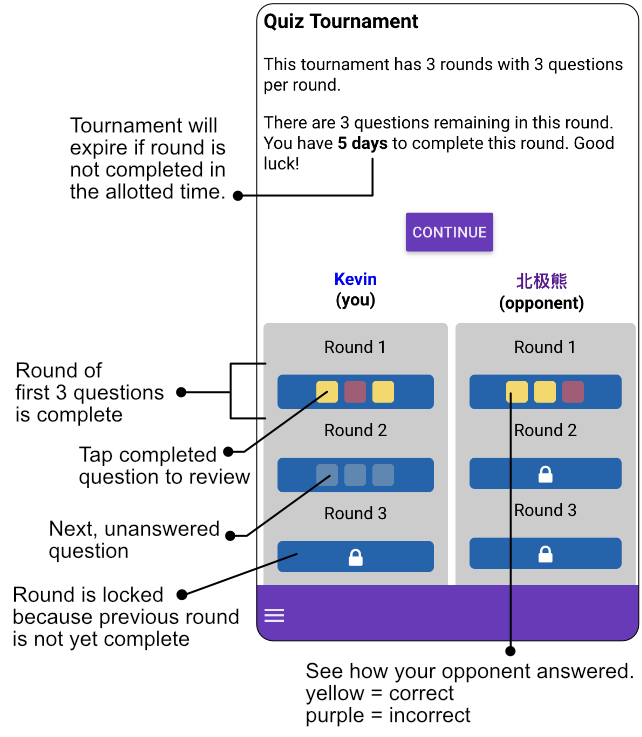 You will have two days to complete each round. If you fail to complete a round in that time, then the tournament will expire, and you will forfeit the win to your opponent.

Quiz tournaments are asynchronous, meaning that you and your opponent can answer the questions at different times, whenever is convenient.

If you choose to build a new tournament, you will be able to select how many rounds you want and how many questions per round.

There are three ways to select an opponent:

If you choose either of the first two methods, your opponent will be emailed an invitation asking if he or she wants to accept or decline the tournament.

These will either be invitations that you sent that have been rejected, and you can select a new opponent, or invitations someone else has sent you.

There will also be a list of your current Quiz Tournaments:

These are ongoing Quiz Tournaments or ones that you have completed or that have expired. Tournaments that you can play now with either have a “Start” button (if they are new) or a “Continue” button. Tournaments that are complete or for which you’re waiting for the next round to be unlocked, will have a “View” button. Expired tournaments are also shown. Tap on the button to go to any of these tournaments.

To get started, select Quiz Tournaments, from the Select page (or just jump directly there).

This activity is opt-in, so that you don’t receive unwanted invitations and so that the opponents you choose among are more likely to be engaged. By the way, initially the activity was opt-out, while we were testing it over the last few weeks, but we decided making it opt-in will result in a better experience. So if you haven’t yet enabled it, you’ll get asked if you want to do so: 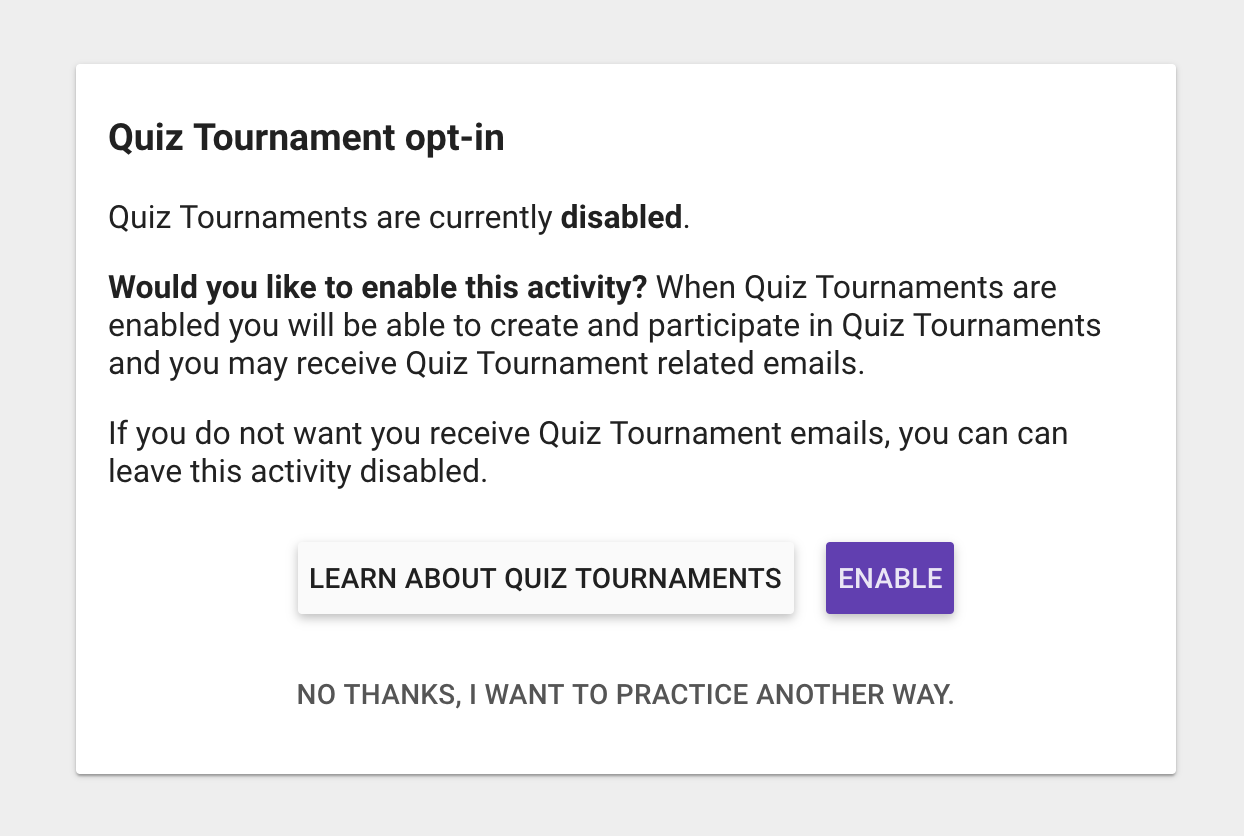 Then, if you haven’t chosen a handle (nickname) for yourself on WordSwing, you’ll need to choose one in order to participate in Quiz Tournaments. This is so that your opponent can recognize you during rematches and subsequent tournaments:

Ready to give it a try?

We hope you enjoy, and don’t forget to let us know what you think or report any problems. As mentioned above, this is the first version and we’re eager to hear what you think! What other categories would you like? What could we improve to make this more engaging?