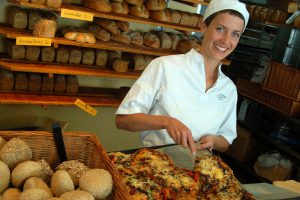 As anyone who has tried using mnemonics to learn something knows, some concepts are easier to link together than others. In general, the more abstract a concept is, the harder it is to associate to something else, most likely because it’s hard to form vivid pictures of abstract concepts. Thus, concrete nouns and action verbs are fairly easy, while abstract nouns, adjectives and adverbs might be really hard. Since we have no control over what Chinese character actually mean, we need to be able to handle this kind of characters or character components if we want to use mnemonics successfully.

Here are the other articles published in connection with the sensible character learning challenge:

Turn general concepts into specific ones

The first thing we need to pay attention to is the danger of being too general. This is especially true if you rely on other people’s mnemonics (including those I mention on Hacking Chinese). For instance, when you encounter characters with very common components such as 石, 木 or 山, don’t simply say “stone”, “tree” or “mountain”, because these are all general concepts. Instead, think of a specific (imaginary or real) stone, tree or mountain. If you can’t come up with anything, search for a picture on Google. In short, make concepts as concrete as you can.

This is in fact related to a famous experiment in memory research (mentioned in Remembering is a skill you can learn). If you tell a group of people to remember than someone is a “baker” (the profession), and another group that they should remember that the person’s name is “Baker”, it turns out that the first group is more likely to remember the word, even though the word is the same! This is because “baker” is something concrete you can visualise, whereas “Baker” is an abstract concept. Thus, we should try to be as specific and concrete as possible.

Turn the general into something concrete

This is extremely important when you deal with characters that are similar to each other. If you use concrete representations for these, it might suddenly become very easy to remember which character is which. For instance, there are at least three common components which depict some kind of ancient Chinese weapon (the definitions are from Zhongwen.com):

This is a clear case where you obviously need a specific picture. You can’t just say “ancient weapon” and be done with it. In fact, you can’t even say “halberd” or “lance”, because then you will have a hard time remembering which of those three characters it is you’re looking for. Instead, just decide on one single, specific picture and use that.

After some googling, it seems that 戈 is closest to the English word “halberd”, because it has a perpendicular extra blade blade. I know very well what such a weapon looks like and I now associate 戈 with that kind of weapon. For 矛, I’m using a spear, which doesn’t have a perpendicular blade at all. They are used differently and look different, so I’m not likely to confuse them. 殳 lacks a cutting blade altogether and even though I’m not sure what to call this in English, I do have a clear picture of this weapon. Perhaps “cudgel” is okay, at least for mnemonic purposes.

Now this might not be historically accurate, it might even be partly wrong, but it’s good enough for our purposes, we are language learners, not historians (if you are, you probably don’t need mnemonics for these characters). As long as you have three different concepts for these character components, you’ll be fine.

There is no shame in deviating from the real meaning of the character if that helps you to remember it. Of course, it’s always better to stick to real meaning if you can, but in some cases that’s very hard. Let’s say you aren’t really into medieval weaponry and find my distinction above too vague. You might picture 戈 as a lance with two pink sticks taped across it, 矛 as an infant penetrated by a spear, 殳 as someone standing on a table. This will probably work, but try to stick to real meaning and real characters as much as possible. Therefore, the first and second mnemonic above is much better than the third.

The reason is that if you’re making things up, you’re actually learning things that aren’t Chinese. The person standing on the table might allow you to remember the character, but you don’t learn any Chinese in the process and further combinations including that component might not be so obvious. There are three degrees of deviation:

I do 2) for the remaining cases. This means that I might combine existing parts and their original meaning into new pictures and use those pictures, even though the pictures are the product of my own creativity. I almost never do 3), simply because I think learning about real character components is important.

Some characters are extremely hard to deal with because their meanings overlap. The worst case is probably characters that mean “I” or “myself” in some way. There are at least four: 我, 余, 予, 吾. Here’s how I deal with them using the second method mentioned above:

I haven’t really studied classical Chinese grammar, so I can’t tell you what the difference is between these four characters (as far as I know, they are all used). That’s not the point. What I’m getting at here is that you can’t look these up in a dictionary and simply think “I”, because you will end up with four characters having the same meaning. If you want to preserve that meaning, you need to modify the picture to make it memorable somehow. In other words, be concrete, but stick to things that are actually related to the character (like five 五 mouths 口).

Are you tired of confusing 即 and 既?

You’re not the only one. They appear in similar characters, are pronounced the same (but with different tones), share one common component and are just generally really bad-ass leeches for many students (including myself). Therefore, I took some time to come up with a pair of good mnemonics to get rid of the problem once and for all, all in the spirit of the sensible character learning challenge.

Now, to solidify the difference between 即 and 既, let’s look at some examples. I’m not going to go through the process of creating mnemonics for all these, but going through the list is really helpful (I will write an article about this later). If you encounter characters you don’t know, skip them. If you already have other mnemonics, keep them if they work, but switch if you don’t already have a clear picture in your mind.

These are all just examples. I’m not saying this is the best or only way of doing it, I’m simply showing you what I’m doing and what seems to work fairly well.

Creating good mnemonics isn’t easy, especially since most problems become apparent only with hindsight. This means that using mnemonics is an ongoing process. The basic rule still holds: whatever floats your boat. However, if you want your boat to float farther down the stream, it might be a good idea to follow some of the advice offered in this article.