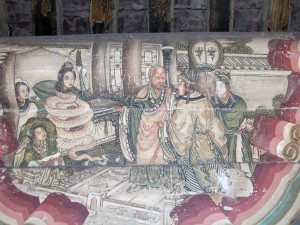 Most curricula these days stress the importance of culture. That includes everyday things like how to greet people, etiquette when eating and so on, which are essential at a beginner and intermediate level, but it also includes “bigger” culture, such as literature, traditional stories and more.

Learning about this kind of culture is quite difficult as a second language learner. This is partly because native speakers learn about it during their whole lives, and partly because we don’t spend enough time on it. But it is important, especially when you reach a more advanced level.

Imagine being a fluent speaker of English who have never heard of Snow White, Cinderella and the Brothers Grimm. You will miss things. The same can be said about modern culture as well, of course, but in this article, I’ll stick to more traditional culture. For example, do you know about these:

To put it briefly, there is a huge body of culture that we don’t necessarily need to know very well, but that we should at least be aware of, because they pop up as references all over the place. Understanding theses stories might also be part of the key to understanding Chinese culture and society in general.

However, for most of us, returning to the original stories isn’t necessarily a good idea. They are often written in classical Chinese and are too difficult even for most advanced students. It could also be argued that focusing on classical Chinese is only indirectly helpful for improving our grasp of modern Chinese.

Fortunately, you can access a lot of culture through cartoons, which will allow you to explore the stories and improve your modern Chinese at the same time. Cartoons are often condensed versions aimed at a younger audience, making them more suitable for second language learners as well. Also, while children’s books in Chinese seem to be written to teach vocabulary, cartoons are aiming for entertainment, which makes them doubly suited for language learning.

Step-by-step guide to learning about Chinese culture through cartoons

This is the approach I’ve used for learning about Chinese culture through various cartoons I’ve found interesting or necessary to know more about. I first did it with this version of 白蛇传 many years ago, so if you if you don’t know where to start, you can try that one as well!

In short, I think this is a great method because it accomplishes several tasks at once (mainly listening and cultural knowledge) while still being quite enjoyable.

Below, I have included a few links to check out. If you have further suggestions, please leave a comment and I will update the list. You can find a lot by searching for 经典/童话/神话 + 故事. Here’s the list: