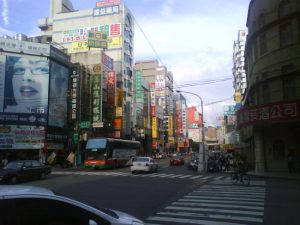 I have spent a fair amount of time studying languages and have encountered a good many weird attitudes and ideas. Some of them have turned up so frequently that they must be parts of general trends rather than ramblings of individuals (such as the notion of native speakers being perfect).

Since some of these ideas are quite interesting and might affect your learning process negatively if you believe in them, I think it is a good idea to write about these prejudices and why they’re false. This time I will write about the fact that you won’t learn a language, especially not Chinese, simply by living in the country.

“So you lived there for two years? Oh, then I suppose you must speak the language fluently by now!”

Even if it might be true that I spoke the language more or less fluently after having lived in Taiwan for two years, this is not simply because I lived there! It seems like the person making this statement believes that simply by living in Taiwan, I automatically learnt Chinese. I know lots and lots of foreigners who have lived in China or Taiwan a lot longer than that and still can’t speak more than basic Chinese.

If you’re Swedish, like me, and you move to Germany, perhaps you will be able to learn the language just by existing in the country, because the learning threshold is so low, but this is not true for Chinese. The threshold for people with English as their native tongue learning Chinese is considerably higher.

I’ve heard people say something like the above quote a hundred times, Chinese-speaking people and foreigners alike.

Fluency is the result of blood, sweat and tears, not a consequence of where you live

Although I suppose you can learn much quickly by being talented, that should be a very unusual exception and it isn’t that interesting for the rest of us. In my case, I didn’t learn Chinese quickly because I’m extremely talented, lived in Taiwan for two years and then somehow magically learnt the language.

No, I have studied very hard, sometimes more than 80 hours a week, although that number includes social learning situations and not only what in traditionally called “studying”. I have worked very, very hard to learn Chinese and if you want to make the most out of your stay abroad, you should do so too.

Likewise, it’s perfectly possible to become fluent in Chinese without ever leaving home. It’s not about where you live, it’s about how much you expose yourself to the language and how much you study.

How much you learn by living abroad is up to you

What you choose to do with your time while living abroad is entirely up to you and the end result is mostly dependent on decisions you make along the way. Some of these might not be within your control, some of them might not even be conscious. Here are a few questions which answers should be quite obvious, but that you should still ask yourself:

Many of these questions are related to aspects of life that are important to people. We don’t find a partner simply because he or she happens to speak Chinese well, and language learning is usually not the main factor when deciding whether to work or not. Still, all these are choices that you should be aware of and that will affect your learning.

Regardless of the reasons why, however, the main argument still stands. You won’t learn Chinese if you don’t make a serious effort to do so. This involves all areas of life, so simply living in China will not teach you Chinese, however many years you live there.