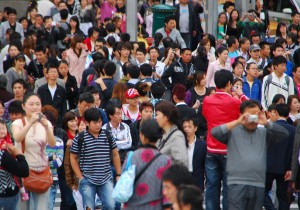 During the time I’ve studied Chinese, I’ve come a cross enough examples of people overestimating the abilities of native speakers to lead me to think that it’s a general trend and not an isolated phenomenon.

For instance, people are embarrassed when I know words in Chinese they don’t (“I’m a native speaker, why don’t I know this word?”) or they can’t understand why I have a category in Anki for Swedish words (“You’re Swedish, why do you need to learn Swedish words?”).

This attitude is so bizarre it left me baffled the first few times. At first, I thought that people who said this were just more ignorant than average, but I’ve come across this so often that it can no longer be dismissed as coincidence: people really seem to think that native speakers know everything about their own language, although it should be obvious that they don’t. This also means that most native speakers overestimate their own language ability, especially when it comes to meta knowledge involving why rather than just what.

This article might sound a bit harsh, and therefore I want to state clearly that my goal is not to bash native speakers or to elevate my own ability in any way. I’m a native speaker of Swedish and having taught Swedish to foreigners, I know there are lots of things I don’t know or can’t explain (and I’m a teacher!). There will always be, but that’s part of the fun.

I’ve also learnt English, Chinese and French which means I can approach the subject from those angles as well. I’m also grateful to a lot of native speakers, so this article should in no way be regarded as diminishing their contribution to my own learning.

Instead, my goal here is to point out that people generally think that being a native speaker is the same as being really good in all areas of a language, and that I think this is mostly false. I also want to point out that someone who masters a language as a second language will have different skills from someone learning it as their native language. This is not good or bad; it simply is that way.

The first mistake people make is to lump native speakers together in one single group. There is a huge difference between a native speaker who reads a hundred books a year and has a  PhD, and a native speaker who dropped out of school at the age of fifteen and spends all his free time playing baseball. Native speakers learn their own language to whatever extent is required of them, which means that the baseball player above will probably have a very weak grasp of formal and written language.

Of course, the opposite is also true, the PhD will know less about baseball. Still, pursuing a career which is heavily based on language (anything even remotely academic)  is bound to increase your vocabulary enormously, so thinking that native speakers are a homogeneous group is just stupid. Research suggests that the number of words that are used in everyday conversation is indeed very low; advanced vocabulary is only needed when discussing something specific or reading something on a decent level of complexity or abstraction. If you do that everyday for a living, you will learn a lot more about the language than if you don’t.

Different people are good at different things. When you read the items below, keep in mind what you can learn from native speakers and what you can learn from other second language learners. For instance, if you want someone to practise conversation with or judge how well you communicate in Chinese, nothing beats a native speaker. However, if you want to know exactly how to change your pronunciation or why something is A rather than B, you need more professional help, preferably from a teacher.

Why is this important?

This insight is important when you learn a second language from native speakers. Don’t think that their knowledge of their own language is infallible just because they are native speakers! For example, I’ve come across many people in Taiwan (some even teachers), who cannot explain the third tone in Mandarin properly. They think that they are accurately describing how they pronounce a given sound, but in reality, they are doing something else and their explanations go against a vast body of empirical research and what is considered established fact by researchers.

Also, native speakers can’t always agree on what is correct in Chinese. What happens quite often is that I get corrected by one native speaker, only to have another one correct me in the other direction. This isn’t necessarily because one is right and the other one wrong, it’s just that Chinese is like that sometimes, it depends on region, the background of the speaker and so on.

Some suggestions and final comments

If you teach your own language, be open and admit that there are lots of things you don’t know. That’s okay and nothing to be ashamed of. Rather, it’s an opportunity to learn and develop further. You will be right most of the time, but thinking that you will be right every time is a sign of ignorance and hubris.

If you’re learning Chinese (or any other language), be aware of the fact that native speakers vary greatly in their own language ability and also in their ability to explain grammar, pronunciation or anything else you might be interested in learning. Listen to your teachers, but don’t be surprised if they’re wrong occasionally.

Leave a Reply to F I MacIllFhinnein Cancel reply