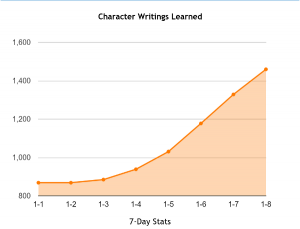 Furthermore, if you are reasonably familiar with characters, I also suggest you turn on the “raw squigs” function (just tick the box in your settings). This will allow you to finish writing all the strokes in the character before Skritter shows you the right strokes. This means that it becomes harder to cheat, because without this function enabled, Skritter will sometimes give you clues (you thought the character started with a dot, but in fact it doesn’t, but since the dot was roughly in the right place, Skritter rewrites the stroke as it should have been written, thus helping you). Lastly, Skritter also offers reminders sent to your e-mail at intervals you decide yourself. If you want to be really accountable, you can link Skritter to your Twitter account, thus allowing everybody to see how it’s going for you.