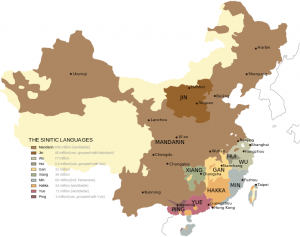 Many people who don’t study Chinese think of the language as being as homogeneous as English (after all, American and British English are very similar). Why would dialects in Chinese be any different?

Well, the first problem is the word dialect. If we’re comparing Mandarin and Cantonese, these are dialects in the sense that they belong to the same language family as is the case for German and Swedish, rather than in the sense that Cockney is a dialect of English.

The word for dialect in Chinese is 方言, and the dialect typically influences the way people speak Mandarin. This is usually called regional accents, so we have people from Taiwan, Shanghai, Hong Kong and so on, all with their different ways of speaking Mandarin. This accented Mandarin should not be confused with Taiwanese, Shanghai dialect or Cantonese, though.

Very few people speak perfectly standard Mandarin, just as very few people in Britain speak perfect RP at home. Thus, when we speak with Chinese people, we have to be able to understand what people say to us, regardless of where they come from.

At first, this looks like a daunting task, because even slight differences in sounds might make you unable to understand anything of what’s being said. Anyone who has arrived in a new place with a new accent will surely know what I’m talking about.

I remember a few confused situations, all taking place during my first year in Taiwan, but the examples I bring up here are mostly relevant for the southern part of Mainland China as well. Do you have any examples of your own? Please leave a comment!

I was out walking late at night and wanted to have some green milk tea. None of the stands selling tea were open, so I headed over to a convenience store (ubiquitous in Taiwan). I placed the tea on the counter and handed over the money and was about to turn around and leave when the clerk suddenly asked:

My brain couldn’t parse this. I shook my head in confusion. The guy looked at me compassionately and said it again, more slowly this time. He could probably see the vocabulary lists scrolling in my brain. Do you want to add happiness? Do you want a happy home? No, sorry, I don’t understand. Then, eureka! He was asking:

I.e. if I wanted him to heat the tea for me! He just pronounced /r/ as /l/. Beginner mistake, I should have figured this one out, but I didn’t.

There is no něng, or is there?

The next example left me even more perplexed. I was waiting for the bus with a friend and she asked me:

This particular friend usually speaks very good Chinese (or at least, I’ve heard other people say so), so I didn’t expect anything fishy. But still, I was pretty sure that there is no neng3 syllable in Mandarin, or if there is, I definitely didn’t know about it. She repeated the question several times, but it was only when she hugged herself as if freezing that I realised that she was asking me if I was feeling cold or not:

This time, /l/ had turned into /n/. Check Albert’s blog for another prime example of l/n confusion.

The last example comes from a radio program. I’ve forgotten what it was about now, but there was a guy talking for about 20 minutes about his “hùmǔ”. I had no idea what a “hùmǔ” was, but I thought that I would find out if I just listened carefully enough. After a while, I figured out that it had to be family related. Then, suddenly I realised that he had been talking about his parents all the time, he just pronounced 父母 as “hùmǔ”, switch f/h.

So, where do these examples leave us? It’s obvious that we have to make considerably adjustments to our mental maps of the Chinese language when we start to speak with people who aren’t teachers or news broadcasters. As usual, this is first and foremost a question of attitude. This is my opinion in a nutshell:

If you don’t understand what someone is saying to you, it’s your fault

This sounds simple enough, but I’ve heard so many people rage and rant about how people from such and such a place can’t pronounce certain sounds or speak Mandarin which is completely unintelligible. This might indeed be true, but that’s that’s not the problem. Will the phenomenon go away if enough foreigners complain online? No, of course it won’t. So deal with it. This is the way the world works and it’s up to you to handle it. Fuming about it won’t help.

Instead, start liking regionally accented Mandarin. Make a conscious effort to think “charming” and “interesting” instead of “weird” and “stupid”. A shift in attitude can do wonders. Sure, it might be more easily said than done, but it’s definitely possible. Perhaps you won’t end up loving how people from Chongqing, but it will help you understand.

In short, there are a few things we can do:

Of course, these aren’t mutually exclusive, so I would suggest talking with lots of people and looking up their various dialects.

It’s mostly about getting used to it

As is the case with listening ability in general, learning to understand regionally accented Mandarin is mostly about getting used to it. After you’ve heard people who switch sound A for sound B talk for a while, you’ll get used to it. Of course, there are many, many A and B, so you need lots of practise, but the principle remains the same. The important thing to understand, though, is that regionally accented Mandarin isn’t that hard to understand once you learn some systematic changes. It might sound like a different language, but provided that your listening ability is okay in general, once you break the code, comprehension will increase very quickly.

Over the years, I’ve gone from thinking that regionally accented Mandarin is dangerous, bad and incomprehensible to thinking that it’s quite charming, good and not that hard once I actually try to learn. I think this journey could have been completed much, much faster if the thoughts in this article would have been available to me when I first arrived in Taiwan.

Addendum: I’m mostly talking about pronunciation here, but it should be noted that there are also differences in vocabulary and grammar. However, a vast majority of the language remains the same, so in my opinion, pronunciation is a much bigger problem than vocabulary and/or grammar.