Using a foreign language to communicate invariably leads to mistakes. This is only natural and making mistakes is, as I have argued elsewhere, necessary if we ever hope to attain a high level of language ability. However, there are many different kinds of mistakes and thus also different ways of handling them. In this post I’ll tell you about four kinds of mistakes and what to do when you encounter them. First, however, some general words of advice.

No, I’ve made a mistake! What should I do? 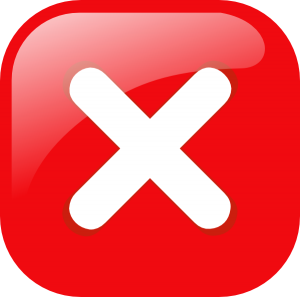 Being corrected and/or learning about one’s own weaknesses is a difficult process and requires a healthy attitude and some practice. Since this article is more about the mistakes themselves and less about attitude, let’s ignore social and emotional factors for now. When you become aware of a mistake, you first priority should be to place the mistake in one of the four following categories.

Don’t worry if you think the definitions of these categories aren’t obvious, I will go through them one by one soon. What you need to do is to ask follow-up questions, think, take notes and determine what kind of problem you’re facing. Only then can you accurately determine which course of action is the right one, from ignoring the problem entirely to spending lots of time trying to pinpoint it exactly and get rid of it.

In general, a mistake is when you produce or perceive language incorrectly, even though you’re aware of the correct form, meaning that you had a chance to do it correctly, but failed. An error is something you genuinely don’t know or can’t produce.

Now, let’s have a closer look at the four categories. They are sorted in order of severity, with the least serious mistakes first and then proceeding to the more nasty varieties.

Careless mistakes (you know what’s right, but you still made a mistake)

This is a very common problem not only for foreigners, but for native speakers as well. You know what you want to say, but for some reason you still get it wrong. It might be because you speak too quickly or because you type sloppily, but the end result is the same. This category then contains mistakes that you would yourself find out if you read your text/listened to a recording of your own speech one more time. It’s not necessary that you actually do find it out yourself, but if you do, that’s very good.

Treatment: If you find the mistake on your own, be sure to correct it immediately. This will hopefully make you less likely to make the mistake again and you will prevent other people from pointing out the problem to you, thinking it’s more serious than it is. If someone else points this out to you, follow the normal guidelines for being corrected and move on. You know that you know the right answer, so you don’t need to spend time here. Try not to show any sign of irritation if people point out mistakes that are obvious typos or similar. Smile and say thank you.

This is a kind of mistakes which is common when you start learning a language. You don’t know how to say something and you have to guess. Perhaps you have no idea how to say something, so the likelihood is that you will often make a mistake. However, since you had no predefined idea how to use a certain word or sentence pattern, this kind of mistake is not very serious. This is just one way to learn new things.

Treatment: Take notes if you think what you have learnt is important enough to learn. If it’s something that’s way above your current level, just ignore it. However, if you’ve already reached an advanced level, I would be very careful indeed and write down any new things you learn that you really ought to know.

Isolated errors (you thought you know what was right, but it wasn’t in this case)

As the above-mentioned problems decrease in frequency, the isolated mistakes start appearing. They are often the result of using previously learnt rules in situations where they aren’t applicable or using words you thought could describe a specific situation, but that actually can’t. A basic mistake of this kind would be saying 他五年 (he is five years old), when it should be 他五岁 (他五歲). You are right in thinking that 年 means year, but you didn’t know that you have to use 岁 (歲) to describe someone’s age.

Treatment: Take notes! This is a very important part of going from “being able to make yourself understood” to “speaking good Chinese”. If you’re using spaced repetition software (which you should), such as Anki, you should change your flashcards to reflect what you’ve learnt, and possibly add more cards if you’ve learnt something entirely new (although that’s more like “uninformed mistakes” above).

Systematic errors (you thought you know what was right, but it’s always wrong)

This is the most serious problem you can ever encounter, but you’re still likely to meet many of them during your language-studying life. I’ve had problems like this many times in all areas of learning Chinese and I suspect I still have a few, although they are gradually being changed to isolated errors. A systematic error means that you make a certain error every time, perhaps without even knowing it. For instance, if you pronounce the third tone before a fourth tone as a rising tone, this is a systematic error and you’re going to make that mistake every time you pronounce this combination of tones. This is very serious indeed and you need to take decisive action.

Treatment: Practice, lots of directed practice. You need to spot these problems as early as you can, because they can be terribly difficult to change if you find them out many years after you started learning Chinese. Talk to your friends and teachers and make sure that they point out this kind of mistake. This is where you should spend all the time you can afford to delve deeper into the problem. How serious is it? What areas are involved? What exactly is the system, the rule, behind your errors? Check this post on my personal website for an example of a detailed analysis of my own pronunciation problems (written after having studied Chinese for 2+ years).

How to use these categories

If the purpose of writing this post still isn’t obvious, let me point it out using just a few sentences. Knowing what kind of mistake you’re making will greatly affect the way you try to repair it. If you suspect that there is a systematic error behind something, you have to act decisively and try to figure out if that’s really the case. Ask questions, check with more than one native speaker.

If it’s not systematic, you can relax a bit, but you should still pay attention if it’s an isolated error or something important that you just haven’t studied yet (uninformed mistake). I tend to almost ignore careless mistakes since they don’t really affect my language ability at all. Just as long as I know that I can say or write something properly if I really want to, I’m happy. This is of course not an excuse to talk or write sloppily, but spending lots of time talking about things you already know wastes time and tends to move focus away from the systematic errors.