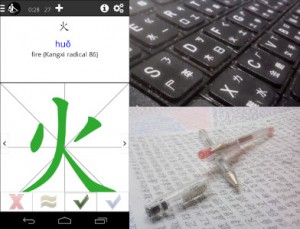 I think that anyone who is serious about learning Chinese should learn to write characters. This isn’t necessarily because you will be required to write a lot by hand (that almost never happens to me), but because it will teach you a lot about how characters work. This will help you recognise characters as well, which is truly essential once you get beyond everyday conversations.

I can (and probably will) write several articles about writing characters, discussing questions like when you should start, how many and which characters you should focus on first. I think all these questions are up for debate and in general, I think Chinese second language education today is focusing way too much on writing characters, routinely requiring students to be able to write all characters by hand (this isn’t really necessary).

Let’s just assume that we have decided to learn to write characters. You could be a beginner working through the first words in a textbook or an advanced learner like myself expanding beyond what’s actually necessary to know.

How should you write the characters? I don’t mean what the strokes should look like or in what order they should be, I mean how do you practically go about writing them?

There are many ways of writing characters, all with their pros and cons. Below I’m going to discuss some of them. I will discuss all of them in terms of their major advantages, how close they are to actual handwriting, how easy it is to cheat and some other factors I find interesting.

The best way of writing Chinese characters by hand

I think the first five methods mention above all work pretty well, but they yield slightly different results and demand different things from you as a learner. It’s easy to cheat with some methods, but if you’re vigilant and strict when grading yourself, this isn’t a big problem. Some methods are less convenient than others, but that also depends on habits and routines.

What method(s) do you use?