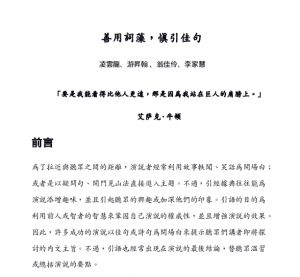 For many learners, writing texts in Chinese is often a translation exercise; you know what you would write in your native language, now you have to translate that into Chinese. Translation is also a valid learning method, although not something you should do all the time.

In this article, I will share some tips and suggestions for how to translate and/or write better texts in Chinese and learn more from the process. Please note that I don’t talk about handwriting here, this is about composing text!

Tip #1: Never translate word by word, focus on the meaning

I have taken a couple of university courses focused on Swedish-English translation, and when we do that, we can mostly stick to the same word order as the original and then adjust sentences as needed. This might not produce great results every time, but it works well because Swedish and English are close linguistically. Overlapping language is in a clear majority.

This is not the case when you translate to Chinese and using the same strategy is a bad idea. You should never translate directly. The result will either be unreadable or very awkward-sounding. That is, even if you use the right words, your text will still be bad if you write English sentences with Chinese characters. What should you do instead? Split the translation into two steps.

It’s very hard to write a text which is both a good translation and a well-written text in Chinese at the same time. Therefore, try splitting the writing process into two steps. First, make sure you translate the meaning of the original text, without caring too much if it sounds good in Chinese or not. It’s okay to use clumsy constructions and phrases you’re not sure how they are used at this stage.

Then, when you have a text that contains the meaning of the original text, forget the original text and work on the Chinese text you have, turning it into as correct and idiomatic Chinese as you can. Sometimes you will need to deviate from the original meaning to do this, but that’s usually okay. If you really care about the translation itself and not just the final text in Chinese, you should then double-check your text against the original to make sure you haven’t changed too much, but this is not necessary if you translate for practice only.

Tip #3: Use what you know, avoid what you don’t

Beginners can express much more than they think. When I started learning Chinese, I remember often thinking that I didn’t know how to express myself. It was very depressing. Then I stopped caring about getting it exactly right and just tried to get as close as possible with whatever I could come up with.This worked a lot better. Since then, I’ve come to the conclusion that one of the reasons is that saying or writing something from scratch is considerably easier than translating it from your native language!

Here is a basic example I encountered with a student last week. He has studied a few chapters in a beginner textbook, and wanted to say “rooms in China are small”. The problem was that he didn’t know how to say “in” and had forgotten how to say “small”. However, he knew the basic function of 的 and remembered how to say 房间 “room” and 中国 “China”.

With the wrong approach, a student in this situation could just say: “I don’t know how to say this in Chinese, there are several words here I don’t know” and give up. With the right approach, the student could try to express what he wants to say with the words he has available. How about: 中国的房间不大?

As it turns out, it didn’t matter that he hadn’t learnt to say “in” (which would probably have created a bad sentence if he had known it anyway) and not knowing how to say “small” didn’t matter either, because “not big” is close enough to the meaning of “small”.

It almost never works for Chinese. This is one of the reasons it’s so hard to learn Chinese. Mappings between words in different languages is seldom 1:1, but it’s pretty close between similar languages. If you use a dictionary with the belief that a word means the same thing and is used in the same way as the English keyword you entered, you’re mistaken. When using a dictionary, you need to pay attention to:

I’m teaching a course this semester where the students are writing reports in Chinese. Their Chinese level is good overall and most of them have reached conversational fluency some time ago, but most of them haven’t written any major text before. My main complaint with the texts they produce is that when they use dictionaries, they fail to pay attention the three areas listed above.. This produces a huge number of weird sentences, sometimes only comprehensible because I can guess what English word they used.

What you should do is look at the example sentences and see if the word means what you think it does and how it’s used in context. If your dictionary doesn’t have example sentences, you should use another dictionary. This certainly takes longer than just selecting a word at random, but your text will be better and you will also learn more from seeing the word used in context. The quickest way to check collocations is by using a search engine.

Some students think that they can write better texts in Chinese by deliberately trying to use more difficult words, longer sentences and so on. This almost never works. If you aren’t already good at writing Chinese, I suggest that you start by writing the way you speak. That will at least be easier to understand and you can gradually make your language less colloquial. I’d rather read a somewhat colloquial text that works, compared with a jumble of difficult words that don’t make sense. Similarly, if you can’t handle long and complex sentences, break them up and gradually increase length as your proficiency increases.

This article contains tips that I wish I could have given myself when I started writing in Chinese. It’s also the tips I give students who want to improve their writing. However, I have also taught enough students to know that most people don’t follow the advice I’ve given here. I realise that this isn’t only because they don’t know how to write, it’s also because they are pressed for time or don’t have the proper resources.

After teaching the writing course this semester, however, I really felt that this was a topic I needed to discuss. Next time, I will have an article I can point to which contains some of the most useful tips. Do you have any other tips? What advice would you offer other people who have just started writing in Chinese?