How to improve your handwriting in Chinese

I have collected more than thirty examples of handwriting in Chinese, most of them from students of different ages from various countries across the world. I also gather some examples from native speakers to show as a reference.

The examples below are presented roughly in the order of time spent learning the language, with beginners at the start and native speakers at the very end. Counting study time in years can be very misleading, but since there is no better way of sorting the samples, I chose to do that anyway.

The purpose of this article is not to make a systematic study of student handwriting, although that would be interesting. Apart from time spent learning, another important factor is what the student’s writing looks like in her native language. I have seen enough student handwriting to feel confident when I say that there’s a lot of positive transfer going on, so someone who writes neatly in their native language are likely to write neatly in Chinese too. Beginners of this kind might write neatly but with incorrect strokes and so on, but penmanship still carries over to learning Chinese.

Speaking of penmanship, it should be mentioned that there is probably a strong selection bias at work here. While not all who submitted their handwriting write well, I think it’s safe to assume that people who like handwriting are more likely to have submitted photos of their handwriting when I asked for it. In other words, the average student probably writes worse than the below photos show.

Finally, here’s the text that I asked people to write by hand. It’s the first paragraph in the text adventure game Escape:

A big thank you to everyone who contributed!

A year or less

The first submission comes from the US, and also include  some information about the student. I collected some submissions two years ago, so “since the beginning of 2016” actually means less than a year of studying! 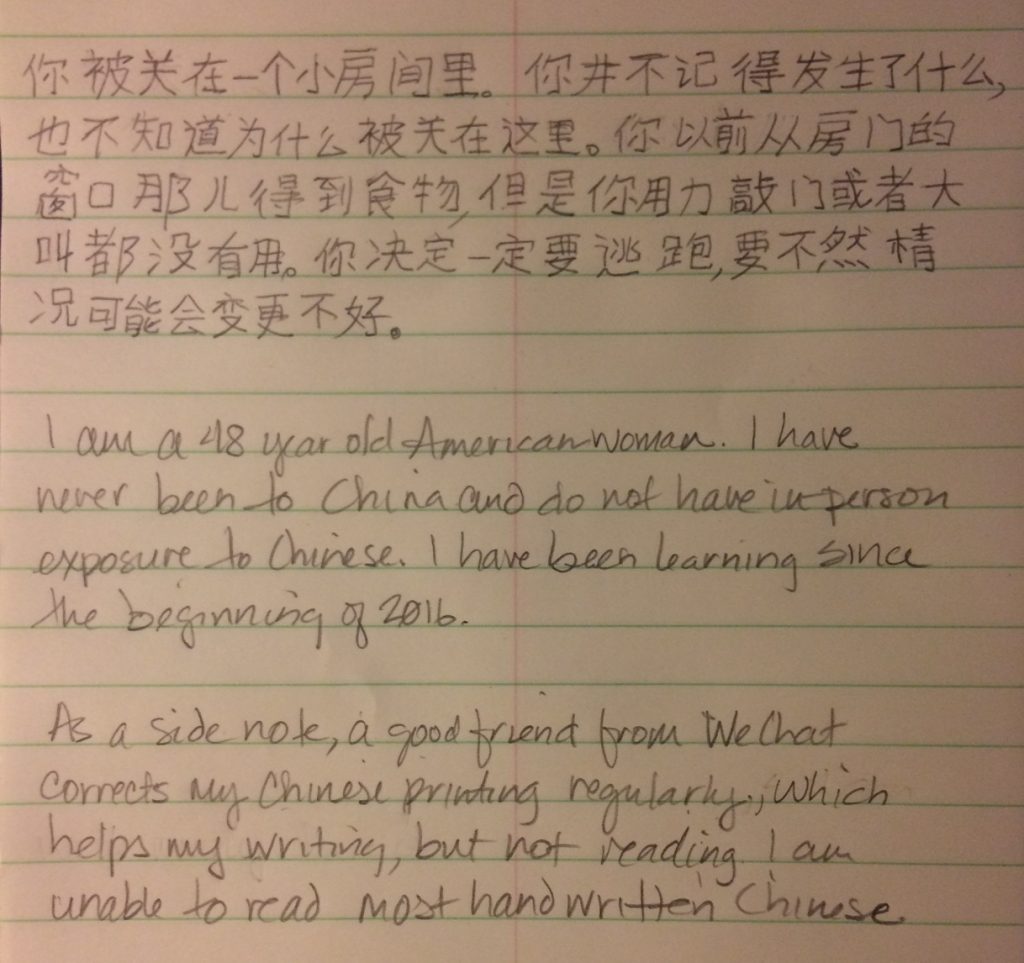 August from Suriname submitted the below sample. He’s 71 and has studied Chinese for one year. 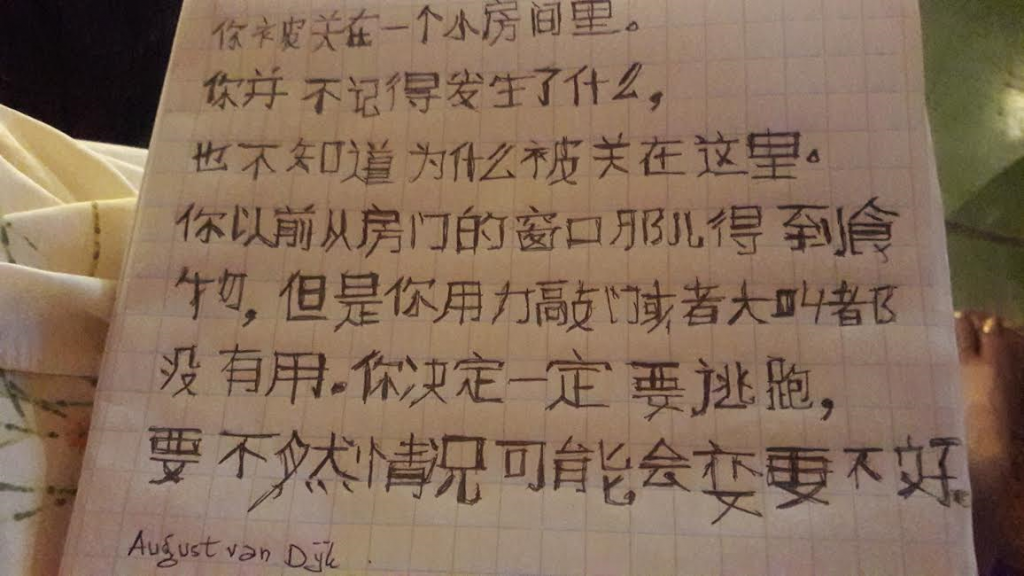 Thomas Walker on Twitter writes: “Here is my effort. Been studying Chinese for about 8 months. Your site has been a massive help, keep up the good work!” 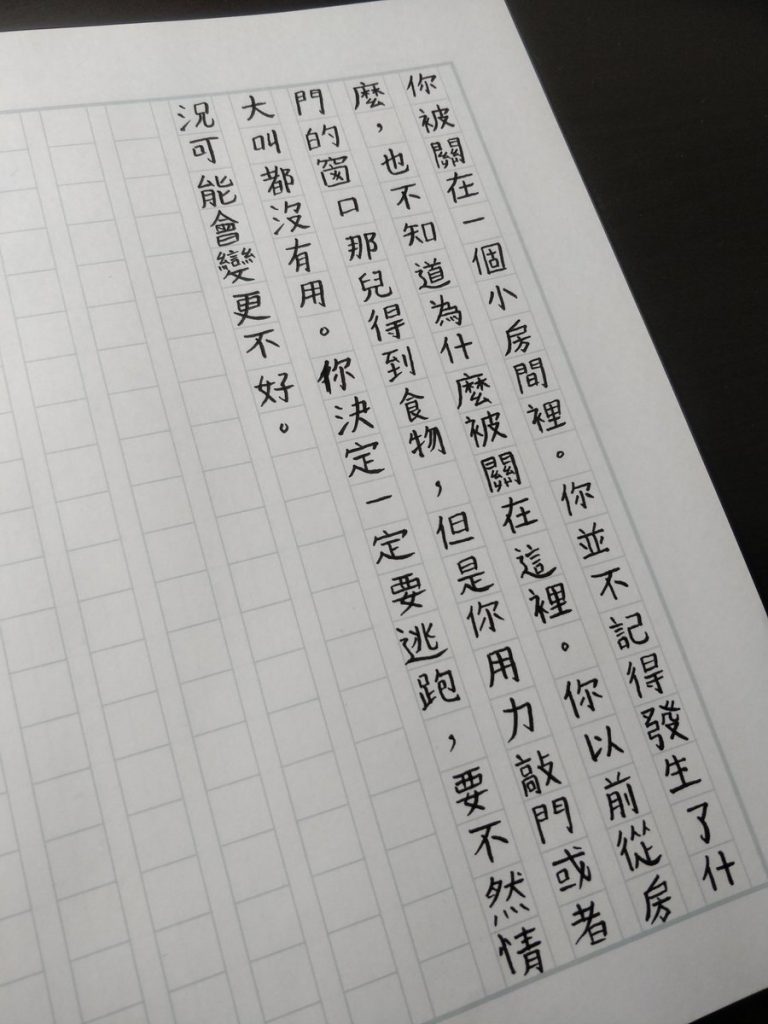 Between one and five years

A student from the US sent in the below photo of his handwriting, saying that he’s 51 years old and has been learning Chinese for a little more than one year.

This is from a 22-year-old Belgian student. She has been studying Chinese for little more than a year:

The next submission is from a 27-year-old Bulgarian student who has studied Chinese for three semesters in Wuhan: 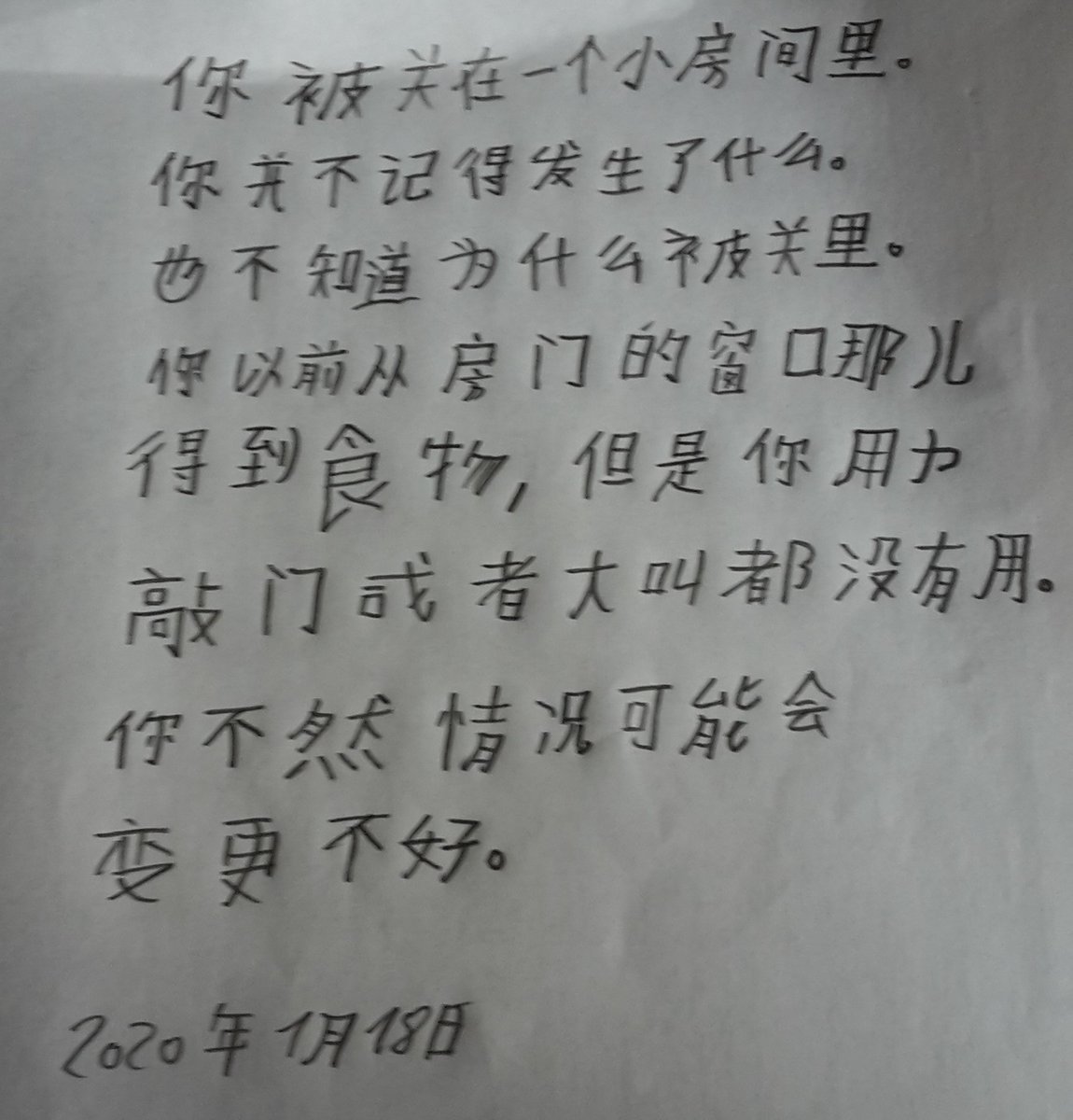 A student from France submitted the following sample, saying “I’m around HSK3, with two years living in China where I self practiced writing despite everybody telling me it’s useless (it’s not; it was super useful every single day, whether teaching my Chinese pupils or writing some unknown OCR resistant character in the street in Pleco). I would practice every day with a cheap calligraphy marker (to force myself to write slowly and purposefully; the difference with using a pen/pencil is like night and day, for learning purposes) in a 10RMB kids hanzi practice book bought in Carrefour and I could totally feel the difference very quickly. I used a pen and wrote as fast as I could to give you something a bit more realistic.”

Next is a sample from a Peruvian student. She’s 24 and has studied Chinese for roughly three years:

The last sample in this category comes from 35-year-old Norwegian, who has studied four years of Chinese, mostly self-studying:

Between five and ten years

Dr. Chuck on Twitter writes: “I haven’t tried learning how to speak it yet, but I’ve studied the traditional writing for fun in my spare time over the past 5 years. My closet is a graveyard of graph paper!”

Joey on Twitter writes: “I’ve been studying for a little over 5 years now. Hope this helps!”

MissFitti on Twitter writes: “I have been learning Mandarin for my BA and MA in Italy and I am now teaching it at Secondary in England. 5 years at uni in total, and lived in china for 1 year and 6 months :)” 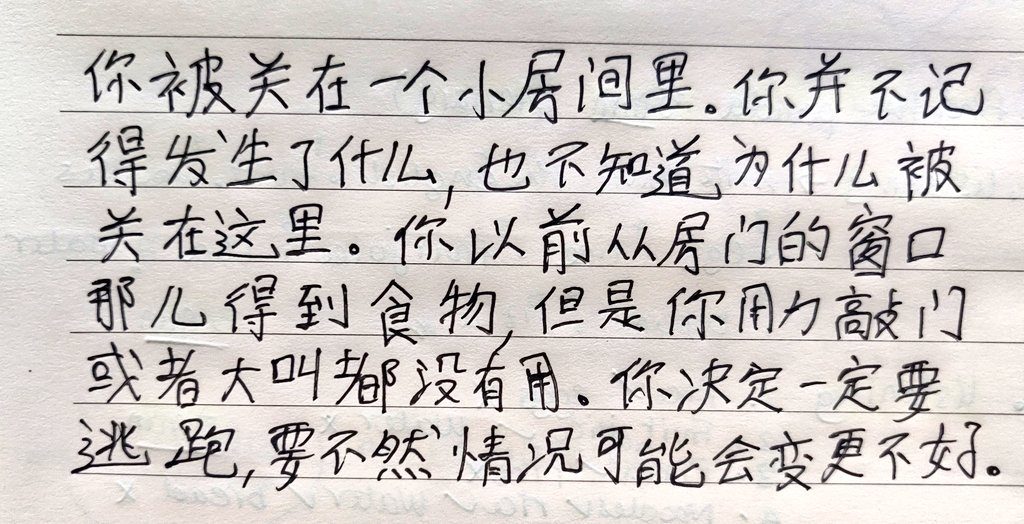 A student from Scotland sent me the below sample of his handwriting. He says  he’s been working in China for over five years, and have studied Chinese, but had very little teaching on how to write characters. Just like the rest of us, he mainly uses phones and computer for writing Chinese: 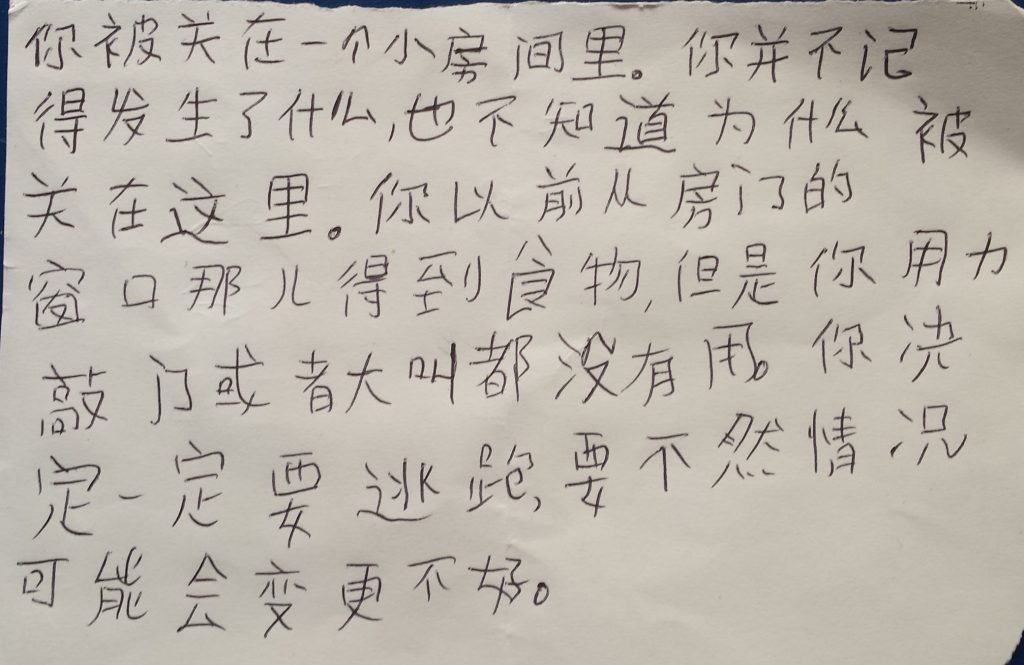 A student from the US submitted the below photo with this comment: “I have been studying, and I use the word studying loosely, Chinese for about 5-6 years.  […] My reading skills far outweigh my listing, speaking, and as you can see from my attached text, writing skills. […] Thanks for all you do. I truly appreciate you.”

Brandon Rivington on Twitter writes: “I tried to make it as natural as possible. I’ve been studying Chinese for about 7 years. I look forward to reading the article!” 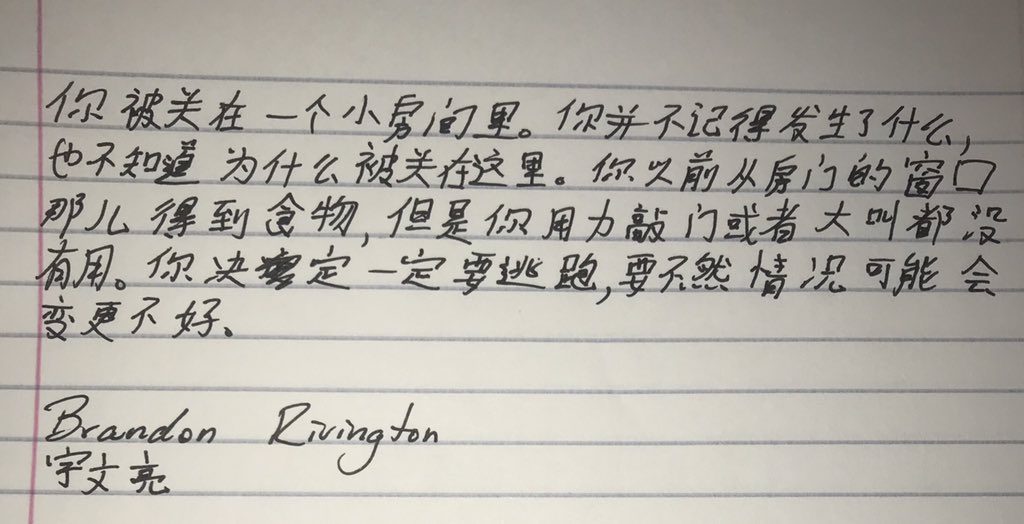 The next sample comes from a 36-year-old student from Spain, who has learnt Chinese for about nine years: 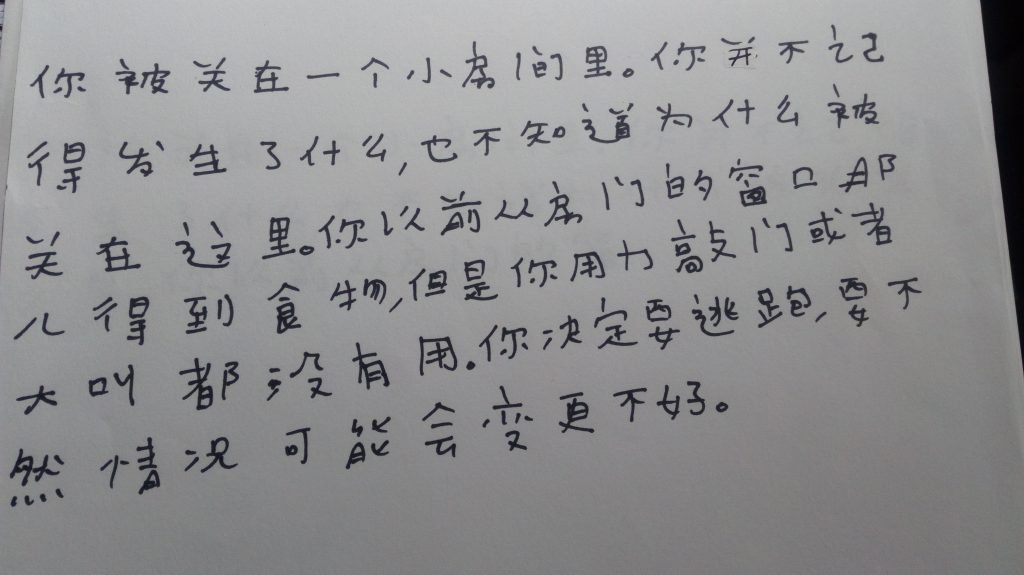 And another submission from Spain, from someone who is two years younger, but has also studied for about nine years:

A Polish student submitted the below photo of his handwriting and said: “I’m 24 years old and I’ve been learning Chinese for about 9 years. 3 years ago I passed HSK5 and I’m planning to pass HSK6 the next year.”

Anna K. on Twitter writes: “Studied Chinese 10+ years, taught it one year. Thanks for your excellent blog and work!”

Margaret from the UK has been studying for 12 years and her handwriting looks like this: 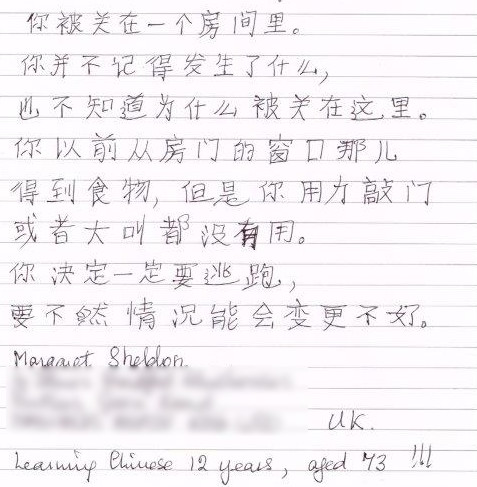 Here’s a submission from Melbourne, Australia (information included). She has been learning for 12 years. 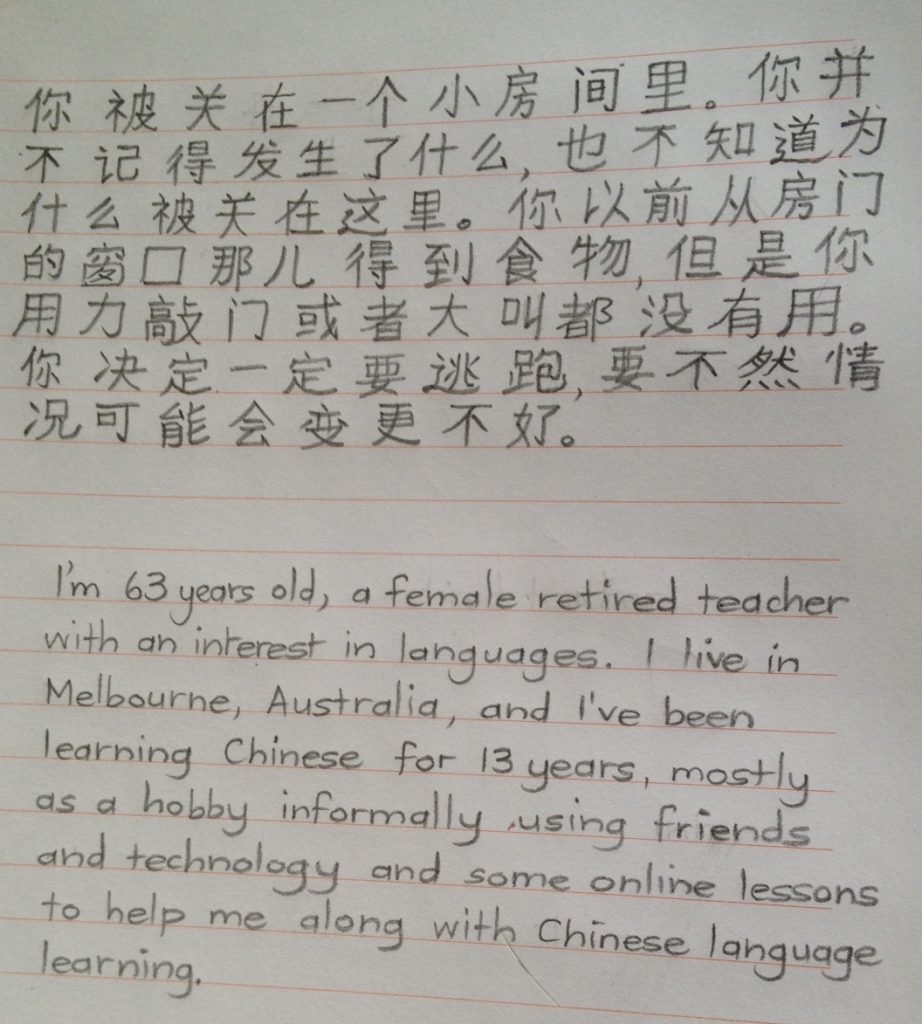 TranslationRaven writes on Twitter: “Studied Chinese for 12 years in school, didn’t read or write for 8 years after that. Returned to Asia and got my teaching diploma in Chinese after those 8 years. Not sure how I’d categorize myself, haha” 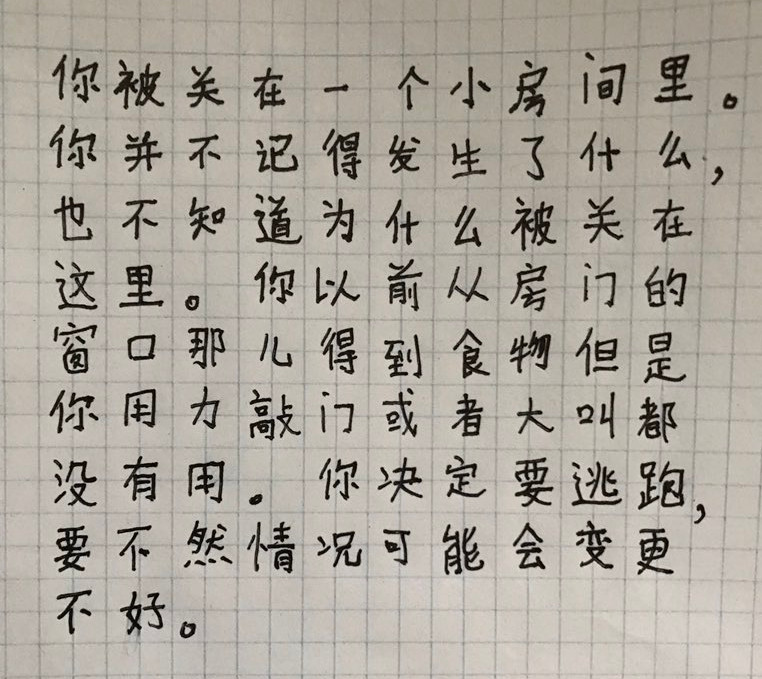 Miriam from Germany submitted the below sample: 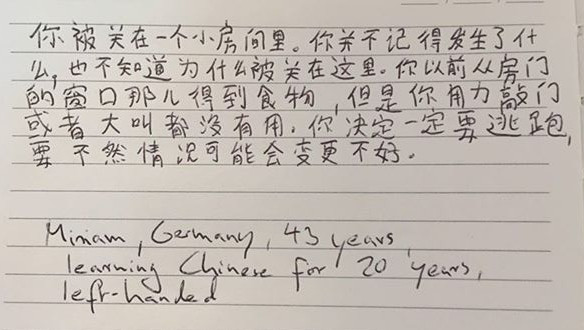 David Hull 胡大衛 on Twitter writes: “Always been very self-conscious about my sloppy handwriting. Picked up Chinese late- in my mid 20s. Studied in PRC and US. I haven’t been writing by hand for years (except on the blackboard). I’m an asst Prof of Chinese now. Started in the army program at the Defense Language Institute in ’96 (we didn’t do much writing at all). I didn’t have a chance to formally study again until ’01, and by then it was almost all typed.” 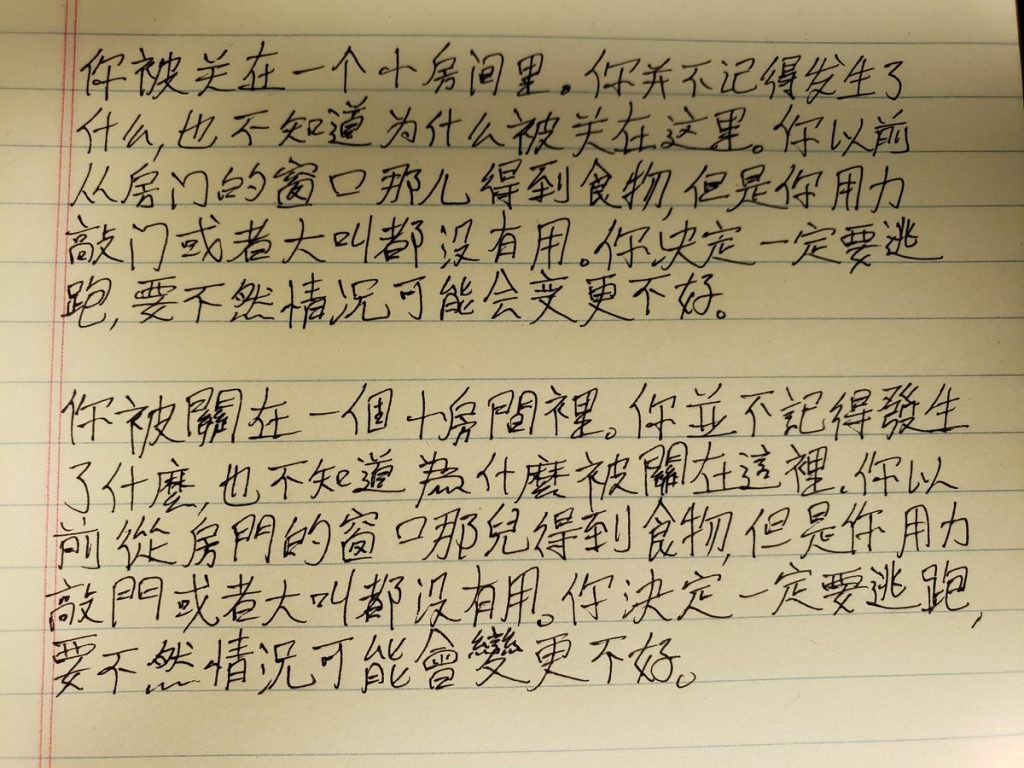 The last sample in this category comes from the US. She has 26 years of formal and informal studying behind her:

Now, let’s move on to native speakers. For people who find some of these difficult to read, please check this article for some advice on how to proceed:

A student, who grew up speaking Chinese with her mother and took a few years of Chinese in school, but then forgot most about it, sent in the following sample. She also writes that “this may be the most I’ve ever written by hand, I do everything digitally now, I practice my writing skills by writing to my mother on my cellphone.”

Vicky Lee on Twitter writes: “I am a little bit shamed to write the Chinese like this? It is only recognizable but far from being beautiful.”

This is from a 22-year-old native speaker (male): 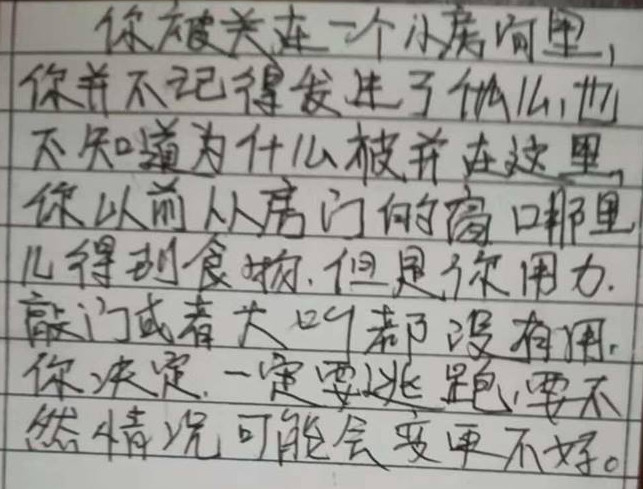 A native speaker from China, submitted this through Facebook Age ~50. “You are very appreciated to promote Chinese culture.” 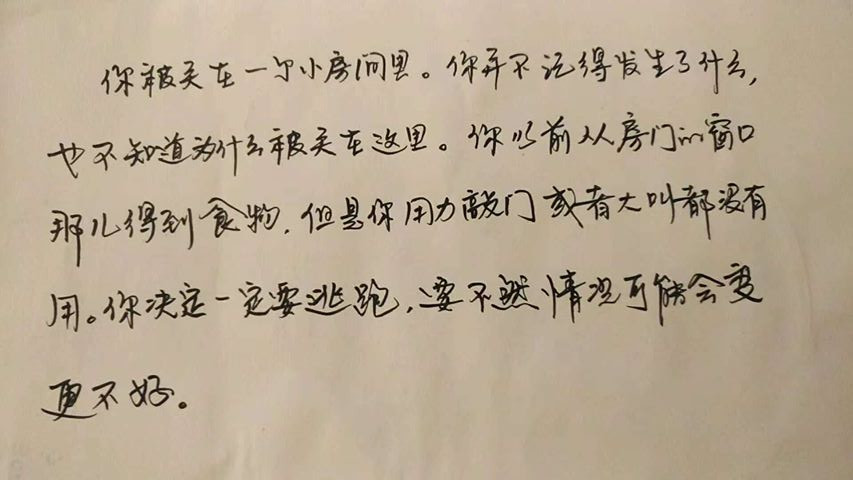 A native speaker who grew up in Malaysia, now in her fifties:

And another native speaker from Beijing (male, around 50): 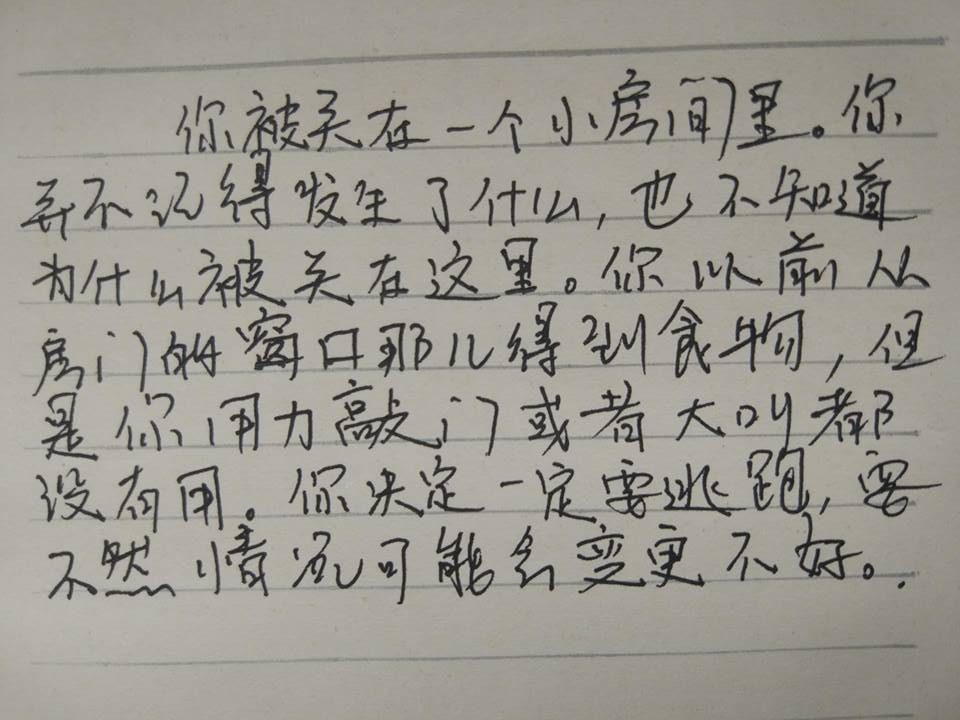 And another one, this time from Guangzhou, 45 years old: 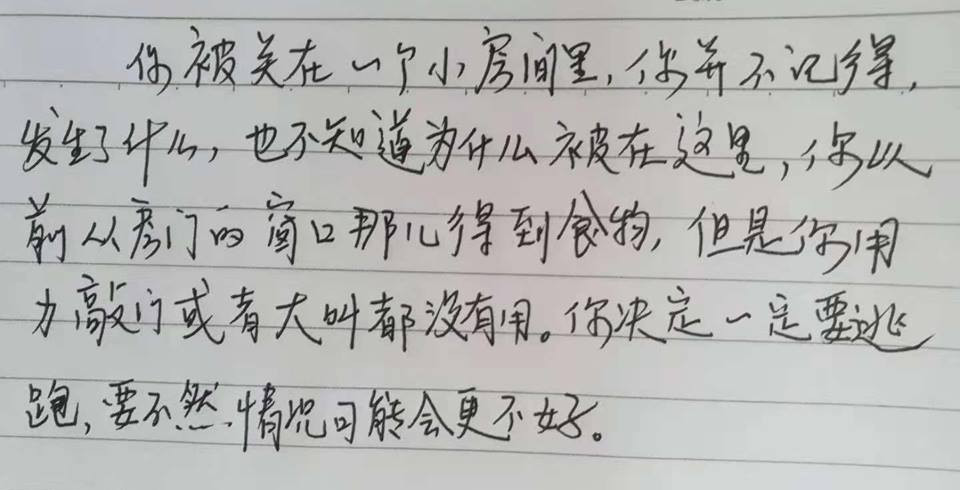 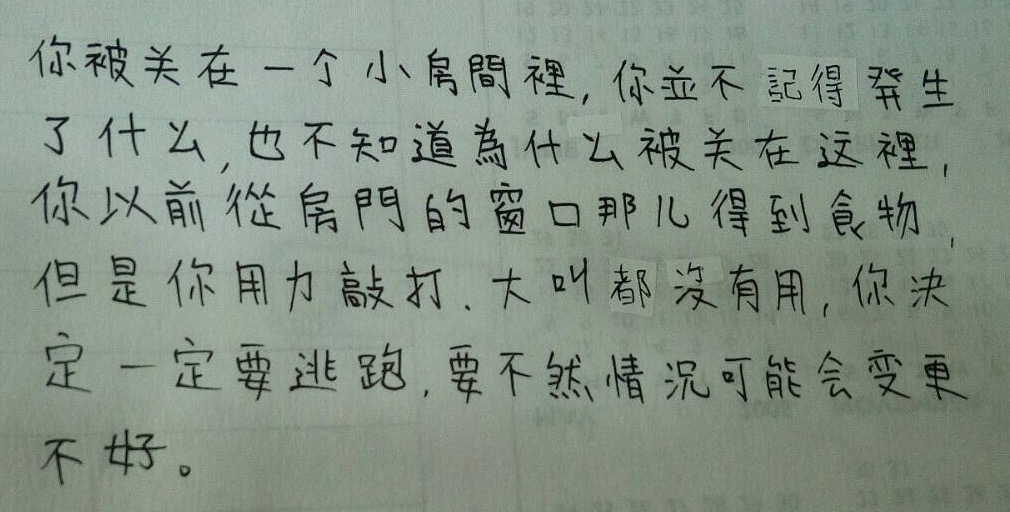 And an extra submission, provided after the article was published, so actually number 37: “Age 28, live in China mainland, written by Lamy Safari”, originally posted here. 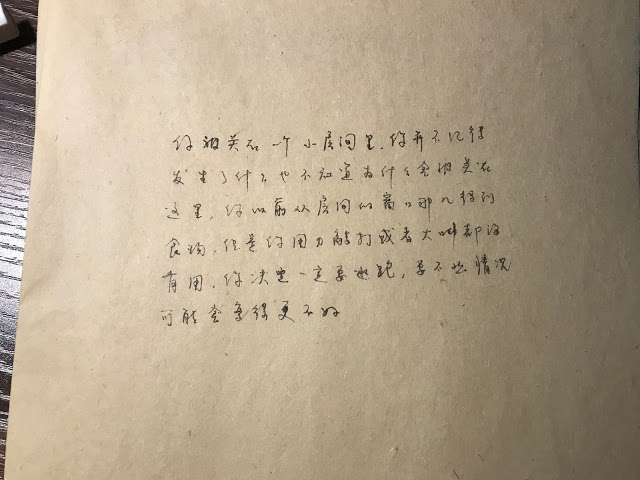 I’m not sure if any conclusion can be drawn from the samples shown above; that wasn’t really the intention. If you have some thoughts you want to share after checking them out, please leave a comment!

How good your handwriting is depends on many things, including how good your penmanship is in your native language. Time spent practising and how much you care are two other important factors. If you don’t think your handwriting is very good because you haven’t practised enough, that’s nothing to be ashamed of. In this electronic era, writing neatly by hand is not an essential skill for most students.

For those of you who want to improve your handwriting, I conclude here by linking to the previous article:

How to improve your Chinese handwriting